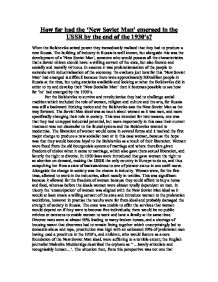 How far had the 'New Soviet Man' emerged in the USSR by the end of the 1930's? When the Bolsheviks seized power they immediately realised that they had to produce a new Russia. The building of industry in Russia is well known, but alongside this was the development of a 'New Soviet Man', someone who would possess all the characteristics that a Soviet citizen should have: a willing servant of the state, but also literate and socially and morally virtuous. In essence it was proletarianisation of the people to coincide with industrialisation of the economy. To evaluate just how far this 'New Soviet Man' had emerged is difficult because there were approximately 200million people in Russia at the time, but using statistics available and looking at what the Bolsheviks did in order to try and develop their 'New Socialist Man' then it becomes possible to see how far 'he' had emerged by the 1930's. For the Bolsheviks to survive and revolutionise they had to challenge social tradition which included the role of women, religion and culture and the arts, for Russia was still a backward thinking nation and the Bolsheviks saw the New Soviet Man as the way forward. The Soviet Man ideal was as much about women as it was men, and more specifically changing their role in society. This was intended for two reasons, one was that they had untapped industrial potential, but more importantly in this case their current treatment was not dissimilar to the feudal system and the Bolsheviks wanted to modernise. The liberation of women would come in several forms and it marked the first major change to produce a new socialist man or in this case woman, because the hope was that they would become loyal to the Bolsheviks as a result of their liberation. Women were freed from the old bourgeoisie system of marriage and where therefore given freedom of choice when it came to marriage, which also gave them sexual liberation, and latterly the right to divorce. ...read more.

The core of the New Soviet Man was atheist, hard working and loyal, but under the current situation of Orthodoxy the first and last criteria were unobtainable. The church was to be crushed rather than altered to allow the New Soviet Man principle to work, and this was implemented in a variety of ways including using the Komsomol as weapons for Socialism. The results were mixed; there wasn't a complete backlash from the church that defeated the New Socialist Man, yet there wasn't a sudden influx of Communism into the ordinary lives of people. In the mid 1920's it is estimated that 55% of peasants still practised religion and supported the church, but what was important was that the urban workers, the proletariat, were adopting the principles of the Bolsheviks at a much more successful rate, and it was in the cities that the Bolsheviks needed the New Soviet Man to emerge and it was the cities that would drag Russia out of here backwardness. Faith was not crushed all together, but it was weakened enough to allow the Bolshevik ideals to have some success that would encourage the creation of the New Socialist Man. Of course an educated and socially aware man could not exist without the reform of culture in General. One of the prime purposes of creating the New Socialist Man was to escape the restraints of the old system, whereby the peasants and the proletariat were uneducated, and so the reform of culture was influenced by the 'liquidation of illiteracy' programmes and the downfall of the church. The current culture was considered bourgeoisie, too focused on the individual and too elitist, so the aim was to create a culture that centred on the 'we' of communism and would help create the Socialist Man who would be willing to be part of a collective, working towards a common goal. Thus the Proletkult was created which had two purposes; one was to educate the masses as the transformation of culture included tackling illiteracy and its other purpose was to become the most important tool in propaganda. ...read more.

responsive whilst being socially and morally virtuous, especially by Bolshevik standards and were undoubtedly educated in some skills, particularly those that were directly beneficial to the state. However, the attempts to change the adult population into the New Soviet Man mould were of little outstanding success. There were minor successes in education for example, whereby several million had become literate through the 'liquidation' programmes, but on the whole people were still illiterate and the remainder of the education system was poor. The New Soviet man was never fully created; propaganda converted a proportion of people to the Bolshevik way, but there was never a majority of Bolshevik idealists - people were more concerned with finding the money to buy food and clothing to worry about ideals, and the Bolshevik party were never very popular. Historian John Barber suggests that only one in five of all workers were keen supporters of the Bolshevik ideals, and that only a very small proportion were actively against the Bolsheviks. This left a very large number of people who were indifferent to the Bolshevik cause, and who were far from New Soviet People; they carried neither the loyalty nor the social or moral virtue set by the Bolsheviks to become part of this ideal. Anti-Stakhanovism popular all over the country because workers felt that it was an attempt to enslave the working class, which was clearly against the Bolshevik ideals of a new part, not least because Stakhanovites were seen as prime examples of New Soviet Men, and there are the earlier examples of workers disregarding Bolshevik ideology in the workplace because they were under very little danger from not conforming, which helps explain why only 1/5th of the working population could be considered as New Soviets. A New Soviet Youth was created with outstanding success; a New Soviet Man however was little more than a faction of the population. By the 1930's there Bolsheviks were not even one quarter of the way to creating a new soviet man. ...read more.