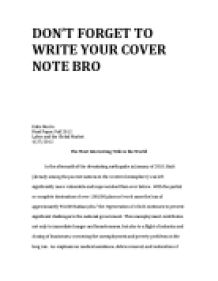 In the aftermath of the devastating earthquake in January of 2010, Haiti (already among the poorest nations in the western hemisphere) was left significantly more vulnerable and impoverished than ever before.

﻿DON?T FORGET TO WRITE YOUR COVER NOTE BRO Katie Norris Final Paper, Fall 2012 Labor and the Global Market 4/27/2012 The Most Interesting Title in the World In the aftermath of the devastating earthquake in January of 2010, Haiti (already among the poorest nations in the western hemisphere) was left significantly more vulnerable and impoverished than ever before. With the partial or complete destruction of over 100,000 places of work came the loss of approximately 90,000 Haitian jobs,1 the regeneration of which continues to present significant challenges to the national government. This unemployment contributes not only to immediate hunger and homelessness, but also to a flight of industry and closing of businesses, worsening the unemployment and poverty problems in the long run. An emphasis on medical assistance, debris removal, and restoration of infrastructure has sidelined economic and social recovery.2 International NGOs have rapidly scaled up their operations in Haiti, including the importing of a significant number of foreign doctors and laborers. While this is assistance is necessary in the short term, sufficient consideration is not being given to the sustainability of newly built response structures. Power still rests in the hands of the international community, and the top-down administration of relief work is not responding effectively to the needs of the general population (particularly women and children). Haitian workers are being largely excluding from leadership or high-responsibility positions within NGO operations, contributing to a lack of organizational accountability. Since the earthquake, decision-making power within the structure of international relief agencies working in Haiti has been almost exclusively limited to foreigners, and large international NGOs have generally elected not to work in collaboration with long-standing grassroots organizations. ...read more.

Children are often expected to work for even lower pay than adults, leading them to accept dangerous jobs in the agriculture and construction sectors. There has also been an increase in child prostitution and the trafficking of children to the Dominican Republic to work in the sex tourism industry.1 An increasing number of children are also becoming as restaveks, live-in servants that work for no pay in exchange for shelter and food. They are more likely to be girls than boys (especially young girls), and the United Nations classifies them as slaves.6 The market for child labor is just as saturated as that for adults, making them vulnerable to increasingly unsafe working conditions, as well as extremely high rates of physical and sexual abuse. Women are also being put at particularly high risk in the economic landscape of Haitian recovery. Because relief programs largely ignore women?s specific needs, hierarchal and gendered power structures have been perpetuated. Birth control has been largely unavailable, leading to an increase in the percentage of new HIV infections in women, an increased birth rate and, subsequently, increased poverty among female-headed households. The failure to supply feminine care products renders the majority of women homebound for several days each month, reducing their ability to work. In the instances in which local opinion is considered in strategic decision-making, it is almost exclusively male opinion. Women are frequently coerced into exchanging sex for food and aid to support their families, and participation in prostitution among adult women has risen.3 Women are more likely than men to take jobs in the manufacturing and garment industries which, as previously stated, are frequently the site of abusive practices. ...read more.

the long run.10 The increased availability of free services has marginalized private sector transactions, weakening the Haitian currency and increasing dependence on bartering and private relationships, systems in which advantage invariably goes to the powerful. Permanent, comprehensive solutions to the existing labor issues must also be discussed in order to prevent a return to the poverty that was dominant in 2009 and earlier, and to empower the Haitian people to spearhead their own recovery. It is misguided to believe that the existing plan to increase EPZ development without addressing preexisting labor issues therein will contribute to lasting economic growth. A push to establish fair employee-employer relations in this setting, as a model for the rest of the nation, is an important step in assuring the protection of fundamental worker?s rights. It has been observed countless times that in the communities where grassroots social movements and labor organizations maintained their existing power after the earthquake, the efforts of foreign organizations were able to more effectively meet the needs of the local population.3 Without the patronage approach dominant within foreign aid organizations, these operations and new structures have maintained a sense of accountability to the Haitian people, and many more residents were able to access the services provided in the initial response period. By assuming positions as stakeholders in their own short term social and long term economic recovery, the Haitian people would adopt a heightened sense of agency, a greater pride in the rebuilding of their nation, and a comparative advantage in the structuring of labor relations within their country for the decades to come. ...read more.