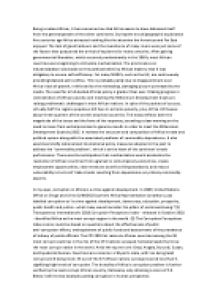 Investigate the Factors that Determine the Well-Being of Africans Today

﻿Being a native African, it has concerned me that Africa seems to have distanced itself from the general growth of the other continents. During the era of geographic exploration five centuries ago Africa attracted nothing like the attention the Americas and Far East enjoyed. The lack of good harbours and the inexistence of many rivers were just some of the factors that postponed the arrival of explorers for many centuries. After gaining governmental liberation, which occurred predominantly in the 1960s, most African countries were beginning to stimulate mechanisation. The prominence on industrialization was based on the political belief, by African leaders, that it was obligatory to ensure self-sufficiency. Yet many MEDCs, such as the UK, are continuously providing bilateral aid to Africa. This is probably partly due to disappointment over Africa?s lack of growth, reinforced by the misleading, damaging picture portrayed by the media. The need for a full-bodied African policy is greater than ever. Making progress in contradiction of African poverty and meeting the Millennium Development Goals are raising problematic challenges in most African nations. In spite of the pockets of success, virtually half the regions populous still lives in extreme poverty, plus, Africa still houses about three-quarters of the world?s deprived countries. This essay reflects both the magnitude of the issues and the forte of the response; sounding a clear warning on the need to move from verbal promises to genuine results in order to meet the Millennium Development Goals by 2015. It reviews the structure and composition of Africa?s trade and political system along with the associated problems of commodity dependence. ...read more.

This form of corruption - smaller in financial terms and not usually involving influential officials or large sums of money - is particularly harmful for the poor. One example of this type of low-level corruption comes from Burkina Faso, ranked 98th in Corruption Perception Index with a score of 3.8. (2) RENLAC, the Burkina Faso anti-corruption network, identified a primary school inspector who used to arrange for teachers posted to rural areas to be transferred back to cities if they paid her small sums of money, thus depriving the rural poor of much needed teachers. (5) In many African countries, teachers at government schools stay away from class or do not take up appointments in remote regions. The results of this behaviour has shocking long-term effects, as children are left without a proper education because of absentee teachers, resulting in them suffering with low cognitive skills and associated problems in adulthood.(6) It is clear then that corruption in all its forms is a crime against development that blocks attempts at growth and poverty eradication. Corruption impacts most heavily on the poor and vulnerable members in society. Thus, fighting on behalf of the disempowered and ensuring Africa?s development means that the responsibility for dealing with corruption falls squarely on all, from Governments and donors to civil society and citizens. Corruption is rife in most African civilisations; nonetheless is worst in countries where: 1. institutions such as the government and judiciary are feeble; 2. the rule of law is not firmly enforced; 3. ...read more.