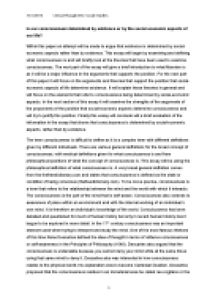 Is our consciousness determined by existence or by the social economic aspects of our life?

Marx and Marxists in general are strong supporters of this and believe that wealth is a key factor when examining society. Marxists believe that there is a base and superstructure in society and that the base consists of the economics and the superstructure being the ideas beliefs values and ideologies of the dominant class which is the owners of the means of production. Marx also comes up with the term Historical Materialism which can be used to explain consciousness in a social and economic manor. For Marx, the idea of materialism is the study of the real economic and social life of humans and of the influence of man?s actual way of life on this thinking and feeling. He states that humans in history are real and creative, who enter into definite necessary relations which are independent of their will Historical materialism is not the way that human beings gain money and have more material comfort neither the material desires to gain satisfaction. It is the way that human beings produce that determines their thinking and desires. He goes into more depth when discussing materialism stating that materialism is the material base of human activities it is the way humans live their lives; it includes thinking and ideology, politics, law, art etc. This can be used to explain Marx?s famous quote ?that life is not determined by consciousness but rather consciousness by life?. Marx also states that a social element is required by humans and human beings cannot live without interaction and cannot be isolated from society as they will not reach these potentials isolated from society. ...read more.

Indeed, Althusser goes so far as to adopt Pascal's formula for belief: Pascal says more or less: Kneel down, move your lips in prayer, and you will believe (Lenin 114). It is our performance of our relation to others and to social institutions that continually instantiates us as subjects. Judith Butler's understanding of performativity could be said to be strongly influenced by this way of thinking about ideology. There is also a concept that Althusser uses in which he state that all individuals are always-already subjects. In this statement it?s clear that Althusser believes that an individual is already a subject even before birth. He uses this explanation to justify his statement ?even before the child is born, it is certain in advance that it will bear its Father's Name, and will therefore have an identity and be irreplaceable. Before its birth, the child is therefore always-already a subject, appointed as a subject in and by the specific familial ideological configuration in which it is 'expected' once it has been conceived? (Lenin 119) As can been seen from the above paragraphs Marxist theory argues that consciousness is determined by more socio-economics aspects rather than by existence. This essay has shown that Marx and Marxism in general have a very complete argument when arguing that consciousness is more than just the concept of existence. It has to take into account other elements such as the social, economic as well as other elements. So to conclude the title of this essay was is our consciousness determined by existence or by that or socio-economic aspects of our life this essay has shown that it is the socio-economic aspects that determine our existence. ...read more.