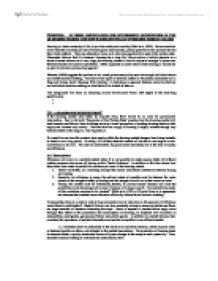 Is there justification for government intervention in the uk housing market and how has recent policy overcome market failure.

QUESTION: IS THERE JUSTIFICATION FOR GOVERNMENT INTERVENTION IN THE UK HOUSING MARKET AND HOW HAS RECENT POLICY OVERCOME MARKET FAILURE Housing is a basic necessity of life; it provides safety and security (Gibb et al, 1999.) Government has never been the universal provide of housing and consequently, policy goals have been pursued by less than direct methods. There are alternative views as to why housing should be part of the welfare state. Glennester believes that it is because 'housing has a long life,' the provision of which depends on a stock of assets whose size is very large; the housing market is slow to adjust to changes in prices and therefore tenants are open to exploitation. Gibbs argument is much wider in that housing is 'conceived as part of a broader social policy agenda.' Wheelan (1998) suggests the problem is too much government policy and not enough individual choice and market decision-making. The idea of two types of decision makers is frequently commented on in King and Oxleys book 'Housing: Who Decides.' A dichotomy is apparent between social (collective) and individual decision-making, an idea that will be looked at later on. This assignment will focus on analysing current Government Policy with regard to the following specific aims: * * 1.0 - A REASON FOR INTERVENTION? If the housing market were taken its simplest form, there would be no need for government intervention. Barr in his book 'Economics of the Welfare State' explains how the housing market will tend towards equilibrium. New buildings are only a small proportion of existing housing stock so total supply can increase only slowly. Thus the short run supply of housing is highly inelastic though may become elastic in the long run. See Appendix 1. It is useful to see from this analysis how supply within the housing market changes from being inelastic to elastic over a long period. In reality, it is unlikely that the market will be able to converge to a new equilibrium on its own. ...read more.

Since most sellers are also buyers, the financial consequences would be broadly neutral in most cases. 2. The potential gainers under the new arrangements would be first time buyers, this group would be provided with information that they would normally commission and pay for themselves under the current system. Although the cost may be reflected in the purchase price. 3. The potential losers are sellers who are not buying another property. The group will incur the cost of providing a pack but will receive no equivalent benefit on the purchase of a new home. 4. Some people on very low incomes or who need to sell as a result of mortgage arrears for example will face difficulties in assembling the home information pack. Effect on the Market There is a view that the proposals will lead to a permanent reduction in the number of properties coming onto the market because of the deterrent effect on sellers. The requirement to provide a home information pack could be a disincentive to those who were not fully committed to selling their home. Others take the view that although there may an initial drop in the number of properties put up for sale, the market would soon bounce back. There is no way of knowing in advance which of these views is correct. Other countries that have introduced a home information pack, particularly Denmark and New South Wales, Australia, have not noticed a significant impact on the number of completed sales. If nothing were done it would result in things staying as they are now. There is a view that left to it; the market would develop solutions to the problems we have identified. The current problems are very longstanding, however, and the market has failed to come up with solutions so far. Advances in information technology and the introduction of electronic conveyancing would speed up part of the process but would not ensure that key information is made available at the start of the process. ...read more.

Moreover, Britain's tough public spending rules mean councils cannot borrow private money against their assets. But housing associations can, which is why so many councils are now opting for transfer. Raising quality of social housing is one of the government's main objectives in The Housing Green Paper, this in turn requires support for continued transfer of council housing to non-profit-making registered landlords. There is little doubt of the high correlation between those on low incomes, poor housing and homelessness. One policy instrument to be used is an appropriately constructed and operated housing allowance system. It should be payable to households in all tenures and should be a function of household income, household size and housing costs. It should promote maximum choice by households in the type, tenure and location of the housing they occupy. The main points to question are the link between the payment of a housing allowance and housing costs and who receives the payment, the consumer or the provider? Providing reformed income related assistance across all sectors, as the main instrument of housing policy, would correctly acknowledge that housing issues are income distribution issues which need to be addressed by redistributive measures. However, the objective of decent housing will not be achieved simply by giving people more money. Problems of damp, poorly insulated and structured houses will not disappear because of more individual spending power. Eventually, in a market situation with good information and the implications of inelasticity removed, this is predicted to happen in equilibrium. King and Oxley believe the housing policy to be in a 'state of flux.' It seems that there is an apparent contradiction. Government are consistently cutting the level of subsidy going directly to housing providers yet have equally consistently increased the level of control it exercises over them. Government have been trying to do two things which are pulling in opposite directions. On one hand, it is only the government who can decide on housing policy. On the other, the government is trying to release individuals from dependency and make them more responsible. ...read more.