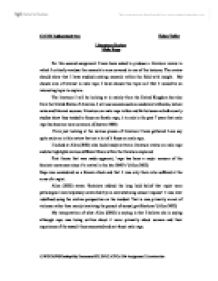 Cri 204 Assignment two Helen Telfer Literature Review Male Rape For this second assignment I have been asked to produce a literature review in which I critically analyse the research in area covered in one of the lectures. The review should show that I have studied existing research within the field with insight. My chosen area of interest is male rape. I have chosen this topic as I feel it would be an interesting topic to explore. The literature I will be looking at is mainly from the United Kingdom but also from the United States of America. I will use sources such as academic textbooks, lecture notes and Internet sources. Literature on male rape is few and far between as before early studies show they tended to focus on female rape, it is only in the past 7 years that male rape has become more common. (Chesters 1998) From just looking at the various pieces of literature I have gathered I can say quite early on in this review that not a lot of it focus on male rape. I looked at Allen (2002) who had already written a literature review on male rape and she highlights various different flaws within the literature explored. First theme that was made apparent, 'rape has been a major concern of the feminist movement since it's revival in the late 1960's' (Allen 2002) Rape was considered as a female attack and that it was only them who suffered at the arms of a rapist. Allen (2002) states 'feminists refuted the long held belief that rapist were pathological men helplessly controlled by an overwhelming sexual impulse' it was later redefined using the victims perspective on the incident 'that is was primarily an act of violence rather than merely involving the pursuit of sexual gratifications' (Allen 2002) My interpretation of what Allen (2002) is saying is that I believe she is saying although rape was being written about it were primarily about women and their experience of the assault they encounted and not about male rape. ...read more.

Reinholtz et al (no date) states that the dominant culture in western societies sends out powerful messages about rape, sex and violence, they argue that 'real rape' is a narrowly defined set of events which consists of a perverted stranger with a weapon, using physical violence to force a women to have penile-vaginal intercourse against their will. Although this widespread image of rape fails to acknowledge the possibility of male sexual victimisation, it nevertheless viewed by the men interviewed for this study as an important yardstick against which to judge their experiences. (Allen 2002) Allen (2002) points that in her findings of her research that not surprisingly, the most important feature of the assault which men used to define their experiences as rape was the non-consensual nature of the attack - the fact that the victim had not wanted intercourse with the offender. She goes on to explain that because the physical act of anal penetration was different from their usual sexual experiences, heterosexual men perceived it as preserve and this facilitated their early perceptions if the experiences as rape. Allen not only goes into the effects that rape with penetration of the penis has on it's victims but also the effects rape has where an object is used. She discovered that in the cases where the victim had been penetrated with an object rather than a penis, the victims found defining the assault, as rape wasn't so straightforward. In her report of her findings to show when the victim describes the attack as rape she uses Edward as an example, who had been anally penetrated with a toilet brush, initially felt that the violence used against him had been physical, as appose to sexual. This is what he had said in his interview when he tried to explain he felt the way he did. ' I didn't define it as rape initially because, well I suppose I tried to convince myself that it was more violent than sexual, but, really, deep down, I knew it was more than that. ...read more.

it's intensely excited, and does not differentiate between a fear response and an arousal response, and because sexual assault involves the genital, that's the particular path the body chooses. Little's (1997) literature doesn't explore male rape in too much depth but it does however prove a very useful source of information. Unlike the others that I have looked at he doesn't produce his own study with regards to a sample group, interviewing them and looking at males of all sexual orientation. From this literature review on male rape I have made my own conclusive ideas about male rape, as a group, men tend to have somewhat different issues regarding having been raped than women might have, although many are similar. The men tend to feel more strongly that they should have been able to prevent the attack, that's it's not supposed to happen to a man. Partly, this is because men aren't as aware that it can happen and also due to the socialisation that men keep. Depending on their social backgrounds many are socialised in to thinking that they should be able to prevent that sort of violence happening to them and if it should then they shouldn't be run over by fear. The studies I have looked at prove this and many of the points raised by Allen (2002) and Chesters (1998) ring far to true for in society today. A lot of the literature used small sample groups, this probably due to the fact that not many men would feel 'man' enough to participate in the study. Using a larger sample group would of given us a larger scale of answers and possibilities into male rape. In order to understand further and to a better extent the effected male rape has on society, there is a need for a more detailed research. I feel there are several areas that need to address, considered and investigated when talking of male rape and they are the complexities, similarities and differences between victims experiences. ...read more.