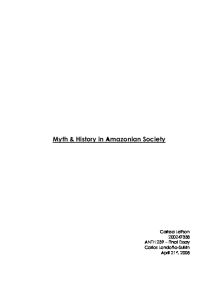 History in anthropology has been largely ignored by many ethnographers prior to indigenous contact with the colonial powers. This has occurred because of the difficulty of proving whether stories told in these societies are historical facts or myths told by generations of people. It has simply been easier to consider indigenous people's current situations as longstanding and unchanging while disregarding the stories told as simply myths meant to teach lessons. In his 1996 essay, "Images of Nature and Society in Amazonian Ethnology", Eduardo Viveiros de Castro points out that the historical study of many of the people of Amazonia is quickly growing. Since there is very little to no recorded history of the indigenous peoples of Amazonia prior to the arrival of the Europeans, there has been significant growth in the study of oral traditions and histories told by the people themselves. No longer are these tales dismissed as myths, but the relations between these stories and the histories of the peoples of the Amazon is being analysed to come up with a broader sense of history in this area of the world. In 2002, Steven Rubenstein wrote "Alejandro Tsakimp: a Shuar healer in the margins of history" which was the account of his time with the Shuar and of his experiences with a man named Alejandro. ...read more.

Myths also suggest certain behaviours for a society; if one does not act in accordance to these expectations, then they no longer fit within that society. While myths provide a sense of meaning and moral order to a society, they also trap the people in to a cookie cutter shape of what they are expected to be. Rubenstein also discusses the dangers of essentialism or the definition of a group by a small set of permanent characteristics that also ignores the circumstances under which these identities came to be. Denying the history of a culture is likely to lead to the essentialization of that society. In his 2001 essay, "An Amazonian Myth and its History," Peter Gow addresses myth and historical change in Amazonia. He begins his essay by introducing two prominent anthropologists in Amazonian studies. Bronislaw Malinowski developed new methods for gathering information through hands-on fieldwork and analysing data in order to understand the daily life of Amazonian peoples. Claude L�vi-Strauss brought the significance of historical studies in Amazonian anthropology to light with his studies of indigenous mythology. While other anthropologists argue that L�vi-Strauss ignored history in his writings, Gow fiercely defends him and says that the problem is with the Marxist approaches to anthropology. He argues that these capitalist approaches only include post-European contact years and deny the history of the Amazonian peoples prior to this. ...read more.

He realized that the Piro view their state of being as one of inherent transformation. Now, instead of ignoring the "ancient people's stories", Gow interpreted them as an essential part of Piro history. He realized that since the stories were repeatedly, they must have importance in everyday life. The ability to connect myth with historical methodology would become an important one. Gow asserted that to include history in anthropological accounts, they would need to begin with ethnographies and first-hand studies. He recognized the drawback of ethnographies: they are drawn from short-term observations that could turn out to be studies of temporary states in complex histories. Also, since most of the historical data recorded about Amazonian societies was written from a European point of view, there are biases and exclusions that may contaminate present-day or future studies. Up until recently, there was very little historical data about Amazonian societies, and even today, in my own opinion, there is a less than satisfactory amount of research being done. Gow and Rubenstein realized and admitted the faults in their own practices after being immersed in Amazonian societies and coming to understand them on a deeper level. They also both recognized the importance of uncovering the histories of the indigenous people of the Amazon. Denying the histories of these societies prior to the arrival of the Europeans is not only insulting towards them, but it is also utterly ridiculous. ...read more.