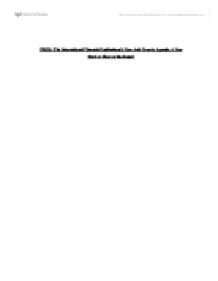 PRSPs: The International Financial Institutions(TM)s New Anti-Poverty Agenda. A New Start or More of the Same?

PRSPs: The International Financial Institutions's New Anti-Poverty Agenda. A New Start or More of the Same? Table of Contents Section Page Title page Abstract Table of contents Introduction Definition of key terms Wider conceptual context Critical analysis of specific literature Interpretation of relevant case study material Conclusions Bibliography Appendices Abstract The World Bank and International Monetary Funds answer to the previously inept structural adjustment programme was the poverty reduction strategy paper, formulated in 1999. Today, countries are required to formulate their own poverty reduction strategy paper, if they wish to receive financial aid from either of the global financial institutions. Our study is based around the debate as to whether the PRSP process is a new start, or more of the same with 3 overriding themes; the wider conceptual context and how PRSPs fit into the global context, critical analysis of specific PRSP related literature and finally case study material, focusing specifically on Zambia and Ethiopia. Introduction Today's globalizing world is one of great controversy, with the rich seemingly getting richer and the poor getting poorer. The concept of global inequality is emphasised by Marcon and Puech who claim that, 'The spatial distribution of economic activity is not homogeneous' (Marcon and Puech, 2002, p1) and through the statistic that 'Almost 1/4 of the worlds total GDP is accounted for by the USA' (Daniels et al, 2005, p295). Poverty, defined by Daniels, 2005 as "The condition of possessing an income insufficient to maintain a minimal standard of living" is of growing global concern and it has been estimated that "over one billion of the world's six billion population live in absolute poverty" (Thirlwall, 2002, cited in Desai and Potter, 2002). It can be argued that this is a consequence of the decline of the state led model. Consequentially, an increasingly neoliberal perspective has been adopted by leading global International Financial Institutions (IFI's) in order to stimulate economic growth and development. ...read more.

'donor countries', 'more prosperous' and 'modern' It has also been argued by Slater that the West only exposes itself to Western writers ideas of development and the south's writings have been largely ignored. The Economic Commission of Latin America was set up because the Central American countries felt they were powerless to stop the west's dominance (Slater, 2004). Allied to these criticisms there is constant talk of corruption within the organisations, the sacking of Paul Wolfowiz (news.bbc.co.uk,www) although unrelated to 3rd world policy was damaging to the institution and to George.W.Bush who elected him. It also called into question the election criteria for these high profile jobs. To understand the reasons and the circumstances as to why the World Bank and the IMF decided on their Millennium Development Goals and PRSPs it appears important to appreciate the circumstances that have made these policies necessary. In many cases the global position of countries was pre-determined by colonialism a long time before the Bretton Woods Institutions were formed. Therefore these international establishments are fighting against historical inequality and prejudice. The arguments against the World Bank and the IMF however are many in number, the most relevant and important ones being possible political motivation behind 3rd World Initiatives. The need for PRSPs is an indicator that world policies towards tackling global inequality have been disappointing at best and ineffectual at worst. Literature Analysis Having studied a wide range of literature focusing on new anti-poverty agendas, a number of the key themes and alternative viewpoints relating to the topic can be identified. The failings of the Structural adjustment programs (SAPs) prior to the Poverty reduction strategy papers (PRSP) approach are well documented, for example Christiansen and Hovland (2003) of the Overseas Development Institution (ODI) talk of Policy Framework papers (PFPs), part of the 'old' SAPs, which instead of being 'country-driven', a key goal of the new agenda, provided governments with very little ownership. ...read more.

By studying the PRSP for Ethiopia, "Ethiopia: Sustainable Development and Poverty Reduction Programme (SDPRP)" (Bijlmakers, 2003) a wide array of criticisms emerge. In his critique, Bijlmakers suggests that Ethiopia's main determining factors are beyond the control of mankind, or at least of the Ethiopian people. This bold statement intensifies the belief that in some situations, a PRSP is insufficient in combating ever increasing global poverty. On the contrary those in favour of PRSPs would argue that it is in fact the application and utilisation of PRSP policies in Ethiopia that have contributed most significantly to the countries downfall. This idea is intensified through the statement, 'low aid utilisation has been seen as a major detriment to PRSP implementation in Ethiopia.' (Bhattacharya, 2005, p18) Whilst there are many sources which solely highlight the negative aspects of PRSPs, it is important to find sources which see PRSPs as beneficial to a country's economy and a successful and effective way to combat poverty. The Second PRSP Implementation Progress Report (2004) suggests that the PRSP in place in Zambia is seeing success. With their economic performance seeing marked improvements between 2002 and 2003, with a real GDP (Gross Domestic Product) growth increase from 3.3 percent to 5.1 percent. Which is not only a significant increase in itself, but it surpassed the PRSP target of 4 percent. This in turn led to an increase in real per capita income of 2.6 percent in 2003, from 2.2 percent in 2002. These statistics are evidence that Zambia experienced economic growth during the period which the PRSP was implemented; suggesting the growth experienced was as a direct consequence of policy efficiency.. In order to conclude this section it is imperative to understand that PRSPs are dynamic; in the way that different countries are affected in different ways and indeed that they provoke great impetus for debate. It also seems apparent that despite the criticisms, there is a great deal of evidence to suggest that if PRSP implementation is well managed, then there is great potential for economic and social development. ...read more.