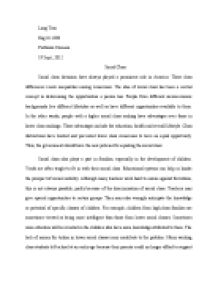 ﻿Long Tran Eng111-03B Professor Comeau 19 Sept., 2012 Social Class Social class divisions have always played a prominent role in America. These class differences create inequalities among Americans. The idea of social class has been a central concept in determining the opportunities a person has. People from different socioeconomic backgrounds live different lifestyles as well as have different opportunities available to them. In the other words, people with a higher social class ranking have advantages over those in lower class rankings. These advantages include the education, health and overall lifestyle. Class distinctions have limited and prevented lower class Americans to have an equal opportunity. Thus, the government should have the new policies for equaling the social class. Social class also plays a part in families, especially in the development of children. Youth are often taught to fit in with their social class. Educational systems can help or hinder the prospect of social mobility. Although many teachers work hard to ensure against favoritism, this is not always possible, partly because of the discrimination of social class. ...read more.

After graduation, they can get a good job with their high education. They might get the high position in a company due to inheritance assets. On other hand, the people from lower-class family are not so privileged. They live in the rent houses or old houses which are in the ghettos and unsafe areas. They have to worry a lot of things such as jobs, earning money, finding the child-rearer to take care their children. They play many roles in their life to take care themselves and their family. Those affect their abilities to attend college; they often feel discouraged and more easily drop out college. There has always been an association between health and social class, and despite the welfare state and the improvement in health in all sections of societies over the years, this discrepancy remains. Social class is a complex issue that may involve status, wealth, culture, background and employment. The relationship between class and ill health is not simple. There are a number of different influences on health, some of which include social class. The greatest influences on the improvement in health with longer expectancy of life, lower infant mortality, etc. ...read more.

Normally, people who live in the upper-class family have many chances to attain their higher education. They also get more privileges in their life; their lifestyles always are the dream of the lower class. They take care better of their health than people living in the lowest social classes, not simply because of a lack of money, but because of their lack of money compared to others and because of their lack of access to resources that can help them, including education and health issues. Poverty in this nation is at the root of many of social issues, and it seems that efforts to recognize the vast gaps in resources between groups must be increased and efforts to improve the access to resources for well-being should be a priority. Word Cited Carey, Kevin, and Erin Dillon. "College Access and Social Class: The A.J. Soprano Factor." Education Sector. N.p., 15 Feb. 2008. Web. 19 Sept. 2012. Mantsios, Gregory. ?Class in America.? The Norton Field Guide To Writing. Ed. Richard Bullock and Maureen D. Goggin. New York: W. W. Norton & Company, 2010. 697-717. Print. Scott, Janny. ?Life at the Top in America Isn?t Just Better, It?s Longer.? New York Times. New York Times, 16 May 2005. Web. 19 Sept. 2012 http://www.nytimes.com/2005/05/16/national/class/HEALTH-FINAL.html?_r=1&pagewanted=all http://www.educationsector.org/publications/college-access-and-social-class-aj-soprano-factor ...read more.