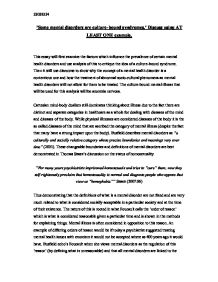 Some mental disorders are culture bound. Discuss in relation to at least one example.

'Some mental disorders are culture-bound syndromes.' Discuss using AT LEAST ONE example. This essay will first examine the factors which influence the prevalence of certain mental health disorders and use analysis of this to critique the idea of a culture-bound syndrome. Then it will use discourse to show why the concept of a mental health disorder is a contentious one and how the treatment of abnormal socio-cultural phenomena as mental health disorders will not allow for them to be treated. The culture-bound mental illness that will be used for this analysis will be anorexia nervosa. Cartesian mind-body dualism still dominates thinking about illness due to the fact there are distinct and separate categories in healthcare as a whole for dealing with diseases of the mind and diseases of the body. While physical illnesses are considered diseases of the body it is the so called diseases of the mind that are ascribed the category of mental illness (despite the fact that many have a strong impact upon the body). Busfield describes mental disorders as "a culturally and socially relative category whose precise boundaries and meanings vary over time" (2001). These changeable boundaries and definitions of mental disorders are best demonstrated in Thomas Szasz's discussion on the status of homosexuality "For many years psychiatrists imprisoned homosexuals and tries to "cure" them; now they self-righteously proclaim that homosexuality is normal and diagnose people who oppose that view as "homophobic"" Szasz (2007:96) ...read more.

This essay has shown that yes we are guilty of look at things not relatively and through our own lenses. While it is not helpful to analyze things in this way, the attempt at a creation of new ways of thinking risk falling into the same categories and are likely to be victim to what Foucault calls "utopias". It has shown how there are two factors that need to be considered when taking of mental illness. The social conditions that cause a particular illness and the cultural conditions that are responsible for the explanation of such. Therefore, it can be said that while certain mental illnesses are considered culture-bound it may be more helpful to consider them social- condition bound with the explanations of these phenomena been rooted in culture. It must also be noted that these cultural explanations are also rooted in particular timeframes. This has all been demonstrated using the example of anorexia nervosa. Further research could be into what effects of globalization has had on what are known as culture-bound illnesses and to see how migration to different countries and cultural settings ahs influenced the prevalence (i.e. the social conditions that cause it), the explanation (i.e. the cultural understanding of it) and the treatment of conditions. ...read more.