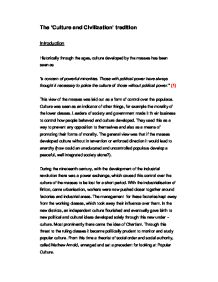 The 'Culture and Civilization' tradition.

The 'Culture and Civilization' tradition Introduction Historically through the ages, culture developed by the masses has been seen as "a concern of powerful minorities. Those with political power have always thought it necessary to police the culture of those without political power." (1) This view of the masses was laid out as a form of control over the populace. Culture was seen as an indicator of other things, for example the morality of the lower classes. Leaders of society and government made it their business to control how people behaved and culture developed. They used this as a way to prevent any opposition to themselves and also as a means of promoting their forms of morality. The general view was that if the masses developed culture without intervention or enforced direction it would lead to anarchy (how could an uneducated and uncontrolled populous develop a peaceful, well integrated society alone?). During the nineteenth century, with the development of the industrial revolution there was a power exchange, which caused this control over the culture of the masses to be lost for a short period. With the industrialisation of Briton, came urbanisation, workers were now pushed closer together around factories and industrial areas. ...read more.

This follows through that everyone has a place in society and that all should look to their betters for guidance. So Arnold, although being the pioneer of modern cultural thinking, seems to have been restricted by tradition and his place in society. Therefore his outlook on today's popular culture simply could not work without some adaptation. He appears to have a fear of the working class and really doesn't try to understand their culture other than from the view that it must be controlled to some extent. If their culture was left to develop alone it would be unchanging; 'the mass of mankind will never have an ardent zeal (to better themselves), very inadequate ideas will always satisfy them' (13) Arnold's view lasted for nearly a century until the 1930's when F. R. Leavis and his wife Queeny Leavis picked up the baton with their publications Mass Civilisation and Minority Culture and Fiction and the reading public. Their ideas were developed in the period between the wars, a time in which they had seen the Wall Street crash in America, along with the building up through the press of movies and film stars, and to some extent American subcultures. This contrasted with the disillusionment of the British public with their government over the handling of the war. ...read more.