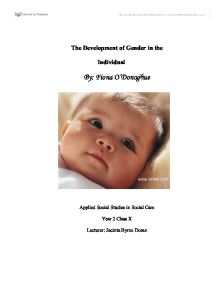 The Development of Gender in the Individual.

The Development of Gender in the Individual By: Fiona O'Donoghue Applied Social Studies in Social Care Year 2 Class X Lecturer: Jacinta Byrne Doran Gender refers to the psychological and emotional characteristics of individuals. Defined broadly, gender includes such aspects as personality traits but also involves psychological makeup, attitudes, beliefs and values as well as sexual orientation and gender-role identity. In the following assignment I am going to take a look at socially imposed patterns in relation to gender, and in turn, their influence on Gender Role Identity and how they are interlinked. I will then discuss the three main psychological theories of gender development: Cognitive developmental theory, Social learning theory, Psychoanalytical theory and their evaluations. I will also take a look at child differences in terms of the games they play, their gender differences in terms of dualism and also group differences. I will then move on to how the educational system can also produce social gender structures. There are many socially imposed patterns that we ourselves play a part in, in everyday life without our realization. We may understand that while we may have no control over the sex of a newborn child, we have much to do with the development or construction of the child's gender. For example, when we find out the biological sex of a newborn, different expectations, attitudes and treatments - what are termed stereotypical "baggage" - are called up in our brains. Thus we see ourselves presenting the proud parents with pink or blue clothing, depending on the whether the baby is female or male respectively, and later on, while we give trucks and cars to boys, the girls receive dolls. ...read more.

At first, the development of boys and girls is similar; both focus their love on the person who spends most time with them - the mother. Around the age of five, boys become aware that they have a penis and girls that they do not, and this leads to their developing a fantasy involving their genitals and their parents, as a result of which they come to identify with the same-sex parents. In the Oedipal phase, a boy feels threatened by the discipline and autonomy, which his father demands of him, fantasizing that the father wishes to remove his penis. Partly consciously, but mostly on an unconscious level, the boy recognizes his father as a rival for the affections of his mother. In repressing erotic feelings towards the mother and accepting the father as a superior being, the boy identifies with the father and becomes aware of his male identity. The boy gives up this love out of the unconscious fear of being castrated by his father. Girls, on the other hand, supposedly suffer from 'penis envy' because they do not possess the visible organ that distinguishes boys. The mother becomes devalued in the little girl's eyes, because she is also seen to lack a penis and to be unable to provide one. When the girl identifies with the mother, she takes over the submissive attitude involved in recognition of being 'second best'. Imitation follows identification, and the gender role behaviour develops. Very little recent work has supported Freud's theory's basic assumption that physical sex differences are the most important determinant of gender identity for children. ...read more.

It could be said that there is an underlying contradiction in the expectations being made of girls. Boys are expected to see education as a basis for planning employment and career paths. Girls are expected to complete and succeed in academic terms but on the other hand, to retain their role as unselfish and non assertive bearers and transmitters of culture and tradition within the family and community. To boys it is made clear that they are expected to be in paid employment for most of their adult life, and education is to prepare them for this. Girls are also expected to use education in this fashion but also receive strong messages about the other roles and responsibilities they will be expected to undertake as women. Stereotypes remain about certain types of occupation. Male occupations are seen as dirty, physical to do with power and strength, while women's occupations express aspects of femininity such as caring, dexterity and communication skills. Men are also still obtaining more high powered and higher paying jobs. From this assignment we have learned that gender is not only a biological factor but has many other influences ranging from socially imposed patterns to psychological development, toys and games, and also different sex orientated education. Most cultures elaborate the biological distinction between male and female into a sprawling network of beliefs and practices that permeate virtually every domain of human activity. Different cultures may define the socially correct behaviours, roles and personality characteristics differently from one another, and these may change over time within culture. But whatever its current definition, each culture still strives to transform male and female infants into "masculine" and "feminine" adults. ...read more.