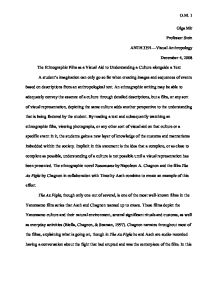 Olga Mir Professor Stein ANTH 3391-Visual Anthropology December 4, 2008 The Ethnographic Film as a Visual Aid to Understanding a Culture alongside a Text A student's imagination can only go so far when creating images and sequences of events based on descriptions from an anthropological text. An ethnographic writing may be able to adequately convey the essence of a culture through detailed descriptions, but a film, or any sort of visual representation, depicting the same culture adds another perspective to the understanding that is being fostered by the student. By reading a text and subsequently watching an ethnographic film, viewing photographs, or any other sort of visual aid on that culture or a specific event in it, the students gains a new layer of knowledge of the customs and mannerisms imbedded within the society. Implicit in this statement is the idea that a complete, or as close to complete as possible, understanding of a culture is not possible until a visual representation has been presented. The ethnographic novel Yanomamo by Napoleon A. Chagnon and the film The Ax Fight by Chagnon in collaboration with Timothy Asch combine to create an example of this effect. The Ax Fight, though only one out of several, is one of the most well-known films in the Yanomamo film series that Asch and Chagnon teamed up to create. ...read more.

However, if the viewer of the film reads the anthropological text before watching the film, he or she may very well be able to decipher the actions of the natives without aid from an instructor. The footage of the fight allows the student to see the full extent of the chaos involved in the "ax fights" the Yanomamo take up to settle disputes. The emotional intensity cannot be captured by words on paper, regardless of how eloquent the anthropologist may write. A film is necessary to convey the emotions and reactions of the natives as they would be in a real situation. From the raw footage, though, there arises a problem. The chaos of fieldwork that is represented in the 11 minute first section of The Ax Fight brings to the forefront the problem of anthropological interpretation, which the other two sections of the film address (Biella, n.d.). Depending on the goals and personal beliefs of the anthropologist, the outbreak of fighting may be interpreted in multiple ways. Chagnon conducted follow-up interviews and researched the village's history and marriage ties to come to his interpretation of the day's events. Thus while his interpretation is well-backed and highly likely to be what "truly" occurred, another anthropologist may see it quite differently. The third section demonstrates how raw film footage, appropriately trimmed, slowed down, and expanded, can provide "empirical evidence needed to make a credible interpretation" (Biella, n.d.). ...read more.

Indeed, the first 11 minutes of The Ax Fight are described in 380 paragraphs of text in Gary Seaman's "Blow-by-Blow Descriptions" (Biella, Chagnon, & Seaman, 1997). Clearly a visual representation adds valuable meaning to a written account of a culture. The example of The Ax Fight is a fine example of the importance of a visual representation alongside the study of an anthropological text, and this argument can be easily extended to all ethnographic work through common sense. Regardless of whether a student is a visual learner, auditory learner, etc., having a variety of ways to learn about a culture is the best way to arrive at a complete understanding of the nuances of that society as well one's own decisions on how he or she feels about certain aspects of any given culture. A film adds another perspective to the information that is obtained from a text. Detailed descriptions are seen in reality rather than imagination and what may have previously not been understood, is now understood. In my own case I did not fully understand the cultural custom of the ax fight until I viewed the film depicting an actual occurrence of such an event. The anger on the faces I saw and passion in the women's cries could not be conveyed through the text. This applies to almost all anthropological texts, and the visual representation proves to be essential in the understanding of a culture. ...read more.