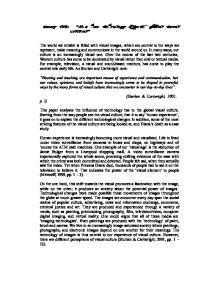 Essay title: "How has technology affected global visual culture?" The world we inhabit is filled with visual images, which are central to the ways we represent, make meaning and communicate in the world around us. In many ways, our culture is an increasingly visual one. Over the course of the last two centuries, Western culture has come to be dominated by visual rather than oral or textual media. For example, television, a visual and sound-based medium, has come to play the central role daily life. As Sturken and Cartwright note: "Hearing and touching are important means of experience and communication, but our values, opinions, and beliefs have increasingly come to be shaped in powerful ways by the many forms of visual culture that we encounter in our day-to-day lives". (Sturken & Cartwright, 2001, p. 1) This paper analyses the influence of technology has to the global visual culture. Starting from the way people see the visual culture, that it to say 'human experience', it goes on to explain the different technological changes. In addition, some of the most striking features of the visual culture are being looked at, and Diana's death as a case study. ...read more.

This tells us much about trends in global economic development and much about the dominant directions in which information flows. The key to understanding this climate of globalisation is visual culture, which means, the understanding of the kind of role they played to support this kind of growth (Sturken & Cartwright, 2001, pp. 316 - 318). The rapid development of communications infrastructure and attendant media industries in the late 20th Century is most closely associated with a global process that is described as time-space compression. Restrictions in time and space are effectively removed by electronic communications and the geographical boundaries between many nations, cultures, societies and individuals are eroded or removed. Essentially, the world becomes mediated; cultural flows increase and dominant exchanges become informational, rather than material, in nature. The globalization of information provides channels of communication and interaction between cultures. The latest such channel is the Internet, the global network of electronic communication, which, by canceling distances of time and space, has contracted the planet and accelerated history (Sturken & Cartwright, 2001, pp. 316 - 318). The pioneering thinker, Marshall McLuhan, coined the term, "the global village" in the 1960s to express his belief that electronic communication would unite the world. ...read more.

Although she lived her life in a dialog with photography, her death was above all a televisual event. From all the websites that were created in honor, none of them matched the creativity and spontaneity that could be seen live on television. The reason is simply because the Internet is a highly regarded informative resource but does not have television's capacity for live reporting. We can also see this by the incidents in New York, on September the 11th. Thousands of people watched the television although there were several Internet sites analyzing the events (Mirzoeff, 1999, pp. 244 - 253). Therefore, we can understand the role new media play in changing the global flow of visual images. Mirzoeff sees the death of Princess Diana as marking the end of photography and the inauguration of global visual culture. Overall, the way that technology has affected global visual culture if of great importance. The fact that people depend on a 'visual element' to believe something is truly significant, and proves the power of visualizing. The power of this element could not exist without technology. After Diana's death, thousands of people sat in front of televisions or read newspapers everyday for months (Mirzoeff, 1999, ch. 7). ...read more.