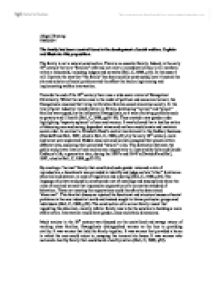 The family has been a central focus in the development of social welfare. Explain and illustrate this proposition.

The family has been a central focus in the development of social welfare. Explain and illustrate this proposition.

The family is not a natural construction. There is no essential family. Indeed, in the early 18th century the term “families” referred, not only to immediate kin but, to all members within a household, including lodgers and servants (Hall, C, 1998, p11). In this essay I will illustrate the way that “the family” has been socially constructed, how it became the site and solution of social problems and the effect this had on legitimising and implementing welfare intervention.

Towards the end of the 18th century there was a wide scale revival of Evangelical Christianity. Whilst the nation was in the midst of political and economic turmoil, the Evangelicals reasoned that living in Christian families could remoralise society. At the time of great industrial transformation in Britain, developing “normal” and “proper” families was argued, by the influential Evangelicals, as a way of solving problems such as poverty and ill health (Hall, C, 1998, pp16-18). They created a new gender order highlighting “separate spheres” of men and women. It was believed that a healthy nation of labouring men and caring, dependent wives and mothers would create and maintain social order. In contrast to Elizabeth Head’s central involvement in the Cadbury business (Davidoff and Hall, 1987, cited in Hall, C, 1998, p21), by the early 19th century, work and home were separated. Middle class men and women occupied their places within different sites, assuming their perceived “natural” roles. This distinction between the public and private lives of men and women respectively is illustrated by John and Candia Cadbury’s life, a generation later, during the 1830’s and 1840’s (Davidoff and Hall, 1987, cited in Hall, C, 1998, pp22-23).

By creating a “normal” family that constituted such gender roles and a site of reproduction, a benchmark was provided to identify and judge certain “other” families as abnormal and deviant; in need of regulation and ordering (Hall, C, 1998, p26). The language of private and public constructed a set of meanings and assumptions about the roles of men and women that imposed an expectation of a normative standard of behaviour. Those not meeting the expectations could therefore be determined “abnormal”. This familial discourse rejected the functional and structural causes of social problems in the new industrial world and instead sought to blame particular groups and individuals (Hall, C, 1998, p26). The construction of a normal family meant that regulating the abnormal, morally inferior family was to be the solution to building a more stable nation. Intervention would have gender, class and ethnic dimensions.

Much anxiety in the 19th century was focused on the uncivilised and savage nature of working class families. Evangelicals distinguished women as the key to providing civility. It was women that held the family together. It was women that provided a home to which the men could return to, escaping the immoral ale house. It was women who nurtured a healthy family that could build a healthy nation (Hall, C, 1998, p36).

However, in the early 19th century many working class families were employed in the mines. Coal miners were regarded as an uncivilised, filthy, savage, outcast group. Women working in the mines were seen to be the antithesis of appropriate forms of femininity (John, 1980, cited in Hall, C, 1998, p36). It was morally degrading work. They endured dirty and dangerous working conditions and importantly, their absence from the home left them unable to perform the expected domestic tasks. Middle class commentators suggested that the absence of these women from the home meant that they were failing to socialise their children and unable to provide domestic comfort for their husbands. The implications of employing women in these arenas constructed that, on moral grounds, the state should intervene to exclude women from such employment and place them into the private sphere of the home (Hall, C, 1998, p37). These reforms were supported by the male miners who believed that it was the willingness of women to work for less that perpetuated their low wage (Hall, C, 1998, p37). Ashley Cooper’s investigation into colliery work argues that a moral and healthy nation depends upon a man earning a sufficient family wage and a mother providing care for her home and family. Intervention to exclude women from certain disorderly employment, such as mines and textile factories, was needed (Hall, C, 1998, p38). The construction of a “normal” family was central to this.

At the time of industrialisation and urbanisation the working class family was defined by the middle classes as a site for concern. It was believed that increasing levels of poverty, morbidity and criminality were caused by the failures and moral ills of the working class (Mooney, G, 1998, p54).

A significant spatial gulf of the classes had emerged. The poor occupied slums close to their work, whilst the rich moved to the leafy suburbs. The city was divided between West and East, rich and poor (Mooney, G, 1998, pp54-56).

This geographical separation and the resulting lack of contact between the classes provoked concern for the consequences on society and its ability to control and regulate the masses. The middle class had fears for the threat of political unrest, social disorder, crime and disease. The poor were outcast, distinguished as savages, living in squalid conditions; a distinct “other”, in need of regulation. This social and geographical distance between the classes legitimated investigation (Mooney, G, 1998, pp60-61). The dominant discourse of poverty in the 19th century focused mainly on the morality of the family. There was wide spread ignorance amongst the middle class about the true desperate conditions experienced by the poor. To the middle class, poverty was the result of the Poor’s lack of morals, discipline and their thriftless behaviour (Mooney, G, 1998, p64).

This emphasis on the failures of working class families led to intervention by charities. Following urban investigation by middle class men, female charity workers sought to penetrate the dark and dangerous landscape in order to remoralise the working class, helping the poor and needy to improve their domestic lives (Mooney, G, 1998, pp80-81). There was a determined need to impose one class’s morals onto a more “deviant” group.

These philanthropists gained approval for the work they were doing although it was deemed necessary to provide the support on a more structured basis. Rather than “indiscriminate alms giving”, charitable work was required to be more scientific (Mooney, G, 1998, pp68-69). This led to the COS developing the Casework Approach, a method that involved entering the homes of the poor to observe all areas of family life. This was to determine the “deserving” from the “undeserving”, distinguishing eligibility for charity relief or entry to the workhouse.

The family was integral to the casework approach and the central target of intervention was the woman. It was believed that family and gender relations were of utmost importance to the reformation of the working class (Mooney, G, 1998, p80). Women’s fulfilment of the gendered role was essential. The improvement of their domestic ability was outlined as the best way to improve the morals of this defective group. Social mothering was the desired form of intervention. Philanthropy was called on to educate women to enable families to maintain themselves and escape the degradation of the poor law (Mooney, G, 1998, p81). This practice used the family as a site of social problems, something to be surveyed by casework, and then sought to remedy them by “working through the home”. They placed a key emphasis on marriage and “naturalised” the sexual division of labour. They believed that the threat to social order posed by the social ills of the working class legitimated investigation. By stressing the importance of women and the family in the reformation process, female philanthropists were able to legitimise their work (Mooney, G, 1998, p83). There was a need to make the private sphere of the family available for public attention and state intervention.

Early education reforms were also implemented in an attempt to remedy the threat posed by the immoral working class (McCoy, L, 1998, pp99-100). In particular, working class youths were constructed in terms of their uncivilised behaviour. They became the focus of moral panic and a source of corruption. To counter fears of social and political unrest, education was viewed as a way of exercising control and ensuring social stability. It reiterated the emphasis on the need to remoralise the poor. Many argued that schooling was a private matter for the family’s concern (McCoy, L, 1998, p98). However, so great was the concern to ensure a strong obedient workforce and calm social and political unrest, state intervention increased. Central to this welfare intervention was the design of the curriculum. As well as basic literacy and numeracy, it focused on reaffirming the gendered roles within the “normative” family. Girls attended classes in Domestic Economy in preparation for their adult role of wife and mother. The emphasis for boys was on industry and obedience, in order to create a strong workforce and maintain the capitalist economy (McCoy, L, 1998, p117). The gendered curriculum was supported by the feminization of teaching. To compensate the idea that education was a private matter for the family, there was an increased presence of female teachers in the public sphere of the school (McCoy, L, 1998, p119). By providing schools and enforcing attendance, although initially resisted, the state had adopted a new role in reforming the nation. The

view that working class families posed a threat to social stability was so great that it ensured the redefined relationship of state and family (McCoy, L, 1998, p120)

. As a result the State was able to supervise and control the behaviour of the dangerous class and re-educate them to adopt their prescribed “natural” role for adult life.

To conclude, the normalisation of the family has been central to the development and implementation of different welfare policy during historical periods. This also extends into contemporary society i.e. the identification of lone parents as “undeserving scroungers”. However, it is important to recognise that the family has been socially constructed. Meanings have been ascribed to the roles found within the family, thus identifying appropriate and inappropriate behaviour (Lewis, G, 1998, p279-280). In this essay I have illustrated this in terms of one class imposing its norms and expectations on to another and the obvious gendered dimension. It is important to recognise that, although the notion of the family is useful in providing a benchmark to compare normal/abnormal, there are other dimensions (such as race, ethnicity and structural implications) involved.