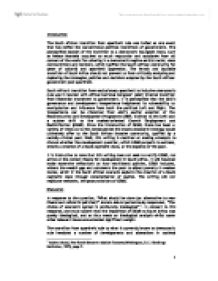 Introduction The South African transition from apartheid rule was hailed as one event that has defied the conventional political transitions of governments. The perceptible leaders of the transition to a democratic bourgeois state, such as Nelson Mandela acquired so much reputation and accolades from all corners of the world for ushering in a democratic regime amidst racial, class contradictions and tensions, which typified the South African community for years of colonial and apartheid oppression. The heroic and laudable transition of South Africa should not prevent us from critically analysing and deploring the strategies, policies and decisions adopted by the South African government post apartheid. South Africa's transition from exclusionary apartheid to inclusive democratic rule was in tandem with African National Congress' (ANC) internal transition from liberation movement to government. It is perceptible that the ANC's governance and development inexperience heightened its vulnerability to manipulation and influence from both the political Left and Right. The inexperience can be discerned from ANC's earlier adoption of the Reconstruction and Development Programme (RDP, inclined to the Left) and a sudden shift to the market-oriented Growth Employment and Redistribution (GEAR). Since the introduction of GEAR, there has been a variety of views as to the consequences the macro-economic strategy would ultimately offer to the South African broader community, typified by a racially divided past. Well, this writing is destined at making attempts to discuss whether the development question, which GEAR purports to address, entails a creation of a black capitalist class, at the expense of the poor. It is instructive to note that this writing does not seek to rectify GEAR, nor arrive at the correct theory for development in South Africa. It will however make extensive reflections on how neo-liberal policies, GEAR included, widens the wealth gap and condemns the poor to abject poverty in weaker states, which in the South African scenario explains the creation of a black capitalist class through deracialisation of capital. ...read more.

Because capitalism needs cheap labour to thrive, black elites had to rely on the already super exploited working class to continue with capitalist production. Capitalism is capitalism, regardless of who controls and facilitates the system. The legislation of the black empowerment Act was tantamount to allowing for the repaint of a gun, yet continue to kill people. While the fiscal restraint "fundamentals" have been overachieved, the flows of foreign direct investment (FDI), have been exceedingly disappointing, and growth has been sluggish, touching just over 3 percent in some years, and currently around 2 percent. More disastrous, however, are the other socio-economic indicators. Over one million workers have lost their jobs in the formal sector since 1994. While current levels of unemployment are contested, no one disputes that we have an extremely serious problem. The most recent government figures, which exclude all of those who are unemployed but not currently seeking work, suggest an unemployment figure of around 27 percent5. This is but some of the conditions the South African poor and working class have to endure, whilst the black elitist few have joined white exploiters/oppressors in depriving ordinary South Africans access to wealth. Unemployment resulted perhaps from various other factors, yet GEAR is preponderantly responsible. A more recent study commissioned by Department of Labour finds that about 32 percent of the labour force is now unemployed, on the narrow definition, and fully 45 percent are unemployed if all those without work are included. South Africa remains, along with Brazil and Guatemala, the most unequal society on earth. This inequality continues to be highly racialised-average African income is 1,638 rand, while average white income is 6,131 rand. However, reflecting the rapid development of a small but not insignificant black elite, intra-"race" inequalities are now at their greatest among Africans-with top African income earners earning twenty-one times that of lowest income earners. Among whites, the top earners earn twelve times that of the lowest income earners6. ...read more.