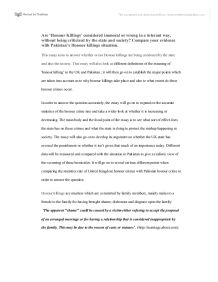 This essay aims to answer whether or not Honour killings are being condoned by the state and also the society. This essay will also look at different definitions of the meaning of 'honour killing in the UK and Pakistan

Are 'Honour Killings' considered immoral or wrong in a tolerant way, without being criticized by the state and society? Compare your evidence with Pakistan's Honour killings situation. This essay aims to answer whether or not Honour killings are being condoned by the state and also the society. This essay will also look at different definitions of the meaning of 'honour killing' in the UK and Pakistan ; it will then go on to establish the major points which are taken into account as to why honour killings take place and also to what extent do these honour crimes occur. In order to answer the question accurately, the essay will go on to expand on the accurate statistics of the honour crime rate and take a wider look at whether it is increasing or decreasing. The main body and the focal point of the essay is to see what sort of effect does the state has on these crimes and what the state is doing to protect the mishap happening in society. The essay will also go on to develop its argument on whether the UK state has severed the punishment or whether it isn't given that much of an importance today. Different data will be measured and compared with the situation in Pakistan to give a realistic view of the occurring of these homicides. It will go on to reveal various different points when comparing the statistics rate of United Kingdom honour crimes with Pakistan honour crime in order to answer the question. ...read more.

The person who kills under the name of honour is trying to confirm and mark their position in the society, in the family and community. He/she uses religion to achieve such a position. Families who lose their honour are not taken seriously in the community that is the sole reason for the taking place of honour killings. This is, without doubt, the consequence of the political power that dominates people's lives. The same system and power imposes laws and regulations such as compulsory veil, negates the right to choose one's life and prohibits freedom of speech in the society. However it is hard to say whether Honour killings are increasing or decreasing in Britain but there may still be many reasons for the increase or decrease in these brutal activities that take place today. Britain is seen as a western society compared to Pakistan which is seen as a traditional society, and this is where the clash occurs within both societies because for example if a family move from Pakistan to Britain they have their traditional morals and values within their family as that is how they have lived and been bought up in Pakistan, however they may actually keep their morals and values alive within their household but this will not fit the western society they are living In and this is where the conflict within the families gradually starts to be built furthermore as women are independent and stand up for their rights in Britain. ...read more.

"Even if there is only one murder, it remains a source of shame in our history." Women and human rights advocates have fought for many years for the honour crimes law to be changed.'(Ginger, 2007) But not all politicians support improvement and law reform. 'Ghalib Inaiz, a member of the parliament's legislative committee, told the conference that the honour crime law "is derived from Islamic sharia, and we cannot change it because a person cannot give up his honour, and he should receive a commuted sentence if he kills one of his relatives if he catches them in the act.' (Melvvin, 2007) Honour crimes are seen as an involvement of the "dominant culture", in other words local tradition rather than religious tenets. Men grow up thinking they are above their wives, mothers, daughters and sisters. This is the primary reason for the occurrence of such crimes. "Islam does not permit unlawful relationship, but killing a girl for this reason is a cold-blooded murder and is a serious offence under the Islamic law," chairman of Shariyat Court Maulana Irfan Mufti Zulfikar said: Killing of an innocent girl is a shameful act, members of the religious court observed." (By Joanne Jowan, 2008) Reference List 1) http://www.telegraph.co.uk/news/uknews/1524023/'Honour-killings'-increasing-in-Britain-as-women-stand-up-for-their-rights.html (last accessed 08/12/2008) 2) http://www.independent.co.uk/news/uk/home-news/a-question-of-honour-police-say-17000-women-are-victims-every-year-780522.html (last accessed 08/12/2008) 3) http://www.csmonitor.com/2005/0120/p06s01-wosc.html?s=widep (last accessed 10/12/2008) Islam, Gender, & Social Change: Yvonne Yazbeck Haddad: 1998:Published by Oxford University Press US, http://www.stophonourkillings.com (accessed on 11/12/08) http://legal-dictionary.thefreedictionary.com/Law+&+human+rights ?? ?? ?? ?? ...read more.