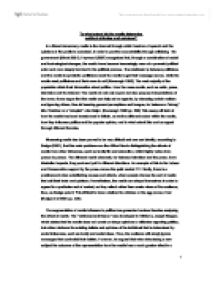 To what extent do the media in Britain determine political attitudes and opinions?

To what extent do the media determine political attitudes and opinions? In a liberal democracy media is the channel through which freedom of speech and the opinions of the public is exercised, in order to provide accountability through criticising the government (Street 2001). Heywood (2007) recognizes that, through a combination of social and technological changes, the media have become increasingly more of a powerful political actor and more deeply involved in the political process. The relationship between politicians and the media is symbiotic: politicians need the media to get their message across, while the media need politicians and their news to sell (Kavanagh 1996). The vast majority of the population attain their information about politics from the mass media, such as radio, press, television and the Internet. The media do not only report, but also propose interpretations of the news. Some argue that the media can help set an agenda, by stressing certain matters and ignoring others, thus influencing general perceptions and images, for instance a "strong" Mrs Thatcher or a "wimpish" John Major. (Kavanagh 1996 pp. 208) This essay will look at how the media has been transformed in Britain, as well as different actors within the media, how they influence politics and the popular opinion, and to what extent this can be argued through different theories. ...read more.

This theory claims that the "Reinforcement Theory" wrongly assumes that people read the paper that suits their own political attitudes, instead claiming that many readers are unsure about the political stance of the very paper they read. They argue that there remains a strong link between the political standpoint of the individual's choice of paper, and the way in which the individual will choose to vote, in spite of any other factors that affect voting behaviour (Budge et al 2001). If media are able to influence and determine political opinion in this way, then perhaps the "reinforcement theorists" do significantly underestimate media's power. Since the Second World War it is noticeable how far Britain has come in terms of the relationship between media and politics. In 1945 there was no television, no opinions polls and politicians communicated with the electors mainly through public meetings and newspapers. In the last half of the century we have seen a transformation where new channels of media has been developed and increasingly used, both in the advantage, and disadvantage of politicians. Almost everything politicians say or do is scrutinised, and parties and their leaders think long and hard about their image and campaigns. Media advisers, or "spin doctors" such as Peter Mandelson for the Labour party, have become key figures in politics, and parties spend millions on advertising (Budge et al. ...read more.

For the politicians it has enabled a more personal approach engaging the public in policy discussion, by, for instance, the blogging by David Cameron, escaping the filters of journalists (Fisher, Denver and Benyon 2003). New media has also created availability on a global level of political news, and the spread of news is increasingly faster and demanding more from the politicians. The media can be seen as the guardians of the public's right to know, and undoubtedly they are the source of most of our information and understanding about the modern world. Clearly the media is only one of many influences on public opinion and political attitudes. One can suggest that media has a limited affect on political behaviour since people have set minds about politics and often read whatever suits their support of party, thus the reinforcement theory would be correct. However, media's choice of what to cover and how it is presented must have an affect on what people think of subjects discussed in the public sphere. Also the different actors, such as owners of media channels and politicians, have a say in what is published in media, thus they are powerful actors indirectly influencing the public opinion. In conclusion one can assume that media is, not the only, but one of the most important factors influencing political behaviours and attitudes. ...read more.