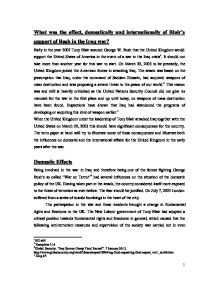 What was the effect, domestically and internationally of Blairs support of Bush in the Iraq war

What was the effect, domestically and internationally of Blair's support of Bush in the Iraq war? Early in the year 2002 Tony Blair assured George W. Bush that the United Kingdom would support the United States of America in the event of a war in the Iraq crisis1. It should not take more than another year for this war to start. On March 20, 2003 to be precisely, the United Kingdom joined the American forces in attacking Iraq. The attack was based on the presumption that Iraq, under the command of Saddam Hussein, had acquired weapons of mass destruction and was proposing a severe threat to the peace of our world.2 This reason was and still is heavily criticized as the United Nations Security Council did not give its mandate for the war in the first place and up until today, no weapons of mass destruction have been found. Inspections have shown that Iraq had abandoned the programs of developing or acquiring this kind of weapon earlier.3 When the United Kingdom under the leadership of Tony Blair attacked Iraq together with the United States on March 20, 2003 this should have significant consequences for the country. The term paper at hand will try to illustrate some of these consequences and illustrate both the influences on domestic and the international affairs for the United Kingdom in the early years after the war. ...read more.

The unpopularity of Brown is often seen as a key element in this context.24 Labour was not able to continue its leadership in the 2010 elections and Gordon Brown stepped down.25 International Effects Just as the domestic politics, the international position of the UK too experienced various consequences from Britain's decision to join the Iraq war. On an international level, the military action was especially crucial as the UN had not given its mandate and a lot of the European states were against it. Wide-ranging effects on its international relations were the result of Britain's choice. The relationship with the United States of America and in particular the one between Tony Blair and George Bush improved, of course and is seen as "one of the successes of the Blair period."26 Although Blair made efforts to prevent a possible military conflict, he was unable to change the attitude of the US. The bound with the States was one of the priorities of his politics so he provided the support.27 It made the UK a loyal ally and a major force in international politics from the US-American point of view.28 This is especially remarkable when it is considered that George Bush was a Republican President who belonged to the right wing while Blair as a member of Labour was rather dedicated to the ...read more.

The consequences were therefore a continuing isolation of a United Kingdom, which did not seem to welcome any of the European developments or values, such as working on a closer and better communication between the central European states or joining the common currency, the Euro. Europe moved on and kept developing without Britain while maintaining the European unity obviously always came second for Blair. The UK showed its intentions clearly when it was not prepared to endanger its Atlantic relations but willingly took part in a war which was against the agreement of its European neighbours. The few achievements Blair had accomplished before the war to improve his relations with the continent were negated by the war. It remained uncertain if the UK would change their politics in the future and choose a different direction. Yet, it was quite likely that a turning towards the central powers of Europe was not going to happen under Tony Blair. He gave some European speeches during his career but was in the end never willing to fulfil his goals. The intentions he had when he took office were neither pursued nor realized and Britain missed the chance of siding with Europe, opposing the USA and turning in a true European country. What stayed was the impression of an isolated Britain or of an 'awkward partner' as it had been called many times before. ...read more.