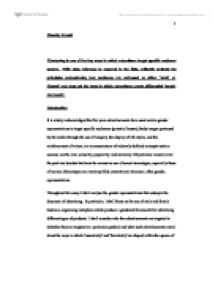 With close reference to research in the field, critically evaluate the principles underpinning how audiences are addressed as either 'male' or 'female' and map out the ways in which advertisers

Timothy Cowell 'Gendering is one of the key ways in which advertisers target specific audience sectors. With close reference to research in the field, critically evaluate the principles underpinning how audiences are addressed as either 'male' or 'female' and map out the ways in which advertisers create differential 'wants' and needs'. Introduction It is widely acknowledged that for years advertisements have used certain gender representations to target specific audiences (potential buyers).Body images portrayed by the media through the use of imagery, the display of life-styles, and the reinforcement of values, are communicators of culturally defined concepts such as success, worth, love, sexuality, popularity, and normalcy. Of particular concern over the past two decades has been the excessive use of sexual stereotypes, especially those of women. Stereotypes are oversimplified conventional character, often gender, representations. Throughout this essay I shall analyse the gender representations that underpin the discourse of advertising. In particular, I shall focus on the use of male and female bodies as organizing metaphors which produce a gendered framework for advertising different types of products. I shall consider who the advertisements are targeted at (whether they are targeted at a particular gender) and what such advertisements reveal about the ways in which 'masculinity' and 'femininity' are shaped within the spaces of everyday life, taking into consideration the affects and influences they have on society. The media plays a vital role in our society, especially in developing opinions of a targeted audience. ...read more.

It pictures a man driving the four-wheel-drive across a rugged terrain in the wild. The caption, "Freelander. Get your hands on one" complements the convention that men like to use their hands and tend to take the "hands-on" approach to situations. This advertisement conveys the stereotype of the brave, heroic man, thus targeting men. It conveys the typically male desire of machoism. A second car advertisement using this stereotype is that for the Volkswagen Golf[URL], which shows a man braving the bad weather to admire the car. An example of gender advertising in car campaigns see figure 2. Here we have a very young boy looking at a G35 Coupe as if in awe of its beauty. In this advert (figure 2.) the car is the feminine aspect; and it is implying that most men from an early age like to play with fast cars as toys and then buy the real thing later in life. It infers that cars are a boys dream and that powerful cars such as this are extremely masculine. Another form of gender stereotyping can be seen in old cigarette adverts. Womens magazines are one of the main ways that the tobacco industry used to target women. They were regarded as a selective medium for reaching and targeting audience. In addition to selectivity, magazines offer advertisers excellent reproduction quality, long message life, and the opportunity for readers to get involved with both the editorial content and advertising. ...read more.

Conclusion In conclusion, the methods of persuasion used in advertising, instead of concentrating on the actual product, usually concentrate on the benefits that will be brought to the consumer. The advertisements play on the personal, emotional desires or interests of the audience they are targeting. For example, they tend to focus on image and style when aiming at women and power and adventure when aiming at men. 'If advertising were to emphasise such honest self-expression rather than focus on women reflected through male eyes, it might serve as a forum for womens voices.'(Catterall, Maclaren, Stevens, 2000.) It has also been found that usually women are portrayed as subordinate to men and also noted that women are shown in a dim manner and portrayed as sex objects (Manstead & McCulloch, 1981). A number of studies have found that men are more used for voice-overs. One reason for this may be because the male voice-over provides authoritative information which is an essential feature of advertisements. Therefore gender stereotyping is a very effective marketing tool used to target a select group audience of a certatin gender, thus gaining the highest sales potential for each marketed product. It is also clear that gender stereotyping has had its roots deeply embedened within our society and cultures, again, re-enforcing old habitual stereotypes onto new audiences. So it is pertinent to conclude on the note that stereotypes bind the advertising media together and will continue to be a significant aspect within all advertisements now and in the future. ...read more.