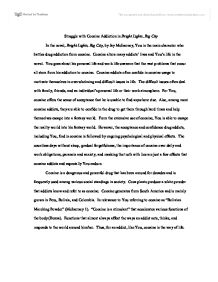 Struggle with Cocaine Addiction in Bright Lights, Big City In the novel, Bright Lights, Big City, by Jay McInerney, You is the main character who battles drug addiction from cocaine. Cocaine alters many addicts' lives and You's life in the novel. You goes about his personal life and work life unaware that the vast problems that occur all stem from his addiction to cocaine. Cocaine addicts often confide in cocaine usage to motivate themselves in overwhelming and difficult issues in life. The difficult issues often deal with family, friends, and an individual's personal life or their work atmosphere. For You, cocaine offers the sense of acceptance that he is unable to find anywhere else. Also, among most cocaine addicts, they are able to confide in the drug to get them through hard times and help themselves escape into a fantasy world. From the extensive use of cocaine, You is able to escape the reality world into his fantasy world. However, the acceptance and confidence drug addicts, including You, find in cocaine is followed by ongoing psychological and physical effects. The countless days without sleep, gradual forgetfulness, the importance of cocaine over daily and work obligations, paranoia and anxiety, and masking the truth with lies are just a few effects that cocaine addicts and especially You endure. Cocaine is a dangerous and powerful drug that has been around for decades and is frequently used among various social standings in society. Coca plants produce a white powder that addicts know and refer to as cocaine. Cocaine generates from South America and is mainly grown in Peru, Bolivia, and Colombia. ...read more.

As problems in life stack up for an addict due to cocaine, they often unnoticing, resort to cocaine to help solve their troubles. Once again, cocaine offers the addict the acceptance and confidence needed to feel in control. "Drugs, for example, can be used as a means of coping with problems to such an extent that the development of more effective coping methods is limited" (Peele 142). Also, once the high from the drug wears off, addicts will do whatever is needed to keep the high going. Thus, addicts "turn to the drug again for more relief" (Woods 23). You resorts to cocaine after getting fired from the magazine and admitting he "screwed up", You regains his composure by snorting cocaine. You's snorting cocaine is an attempt to lighten the feelings and emotions: "In terms of improving your mood, this might be just what the doctor ordered . . ." (McInerney 105). Basically, to You, cocaine helps lighten the mood of reality and puts him in his fantasy world. An escape from reality into a fantasy world is often what addicts want and experience while under the influence of cocaine. In an addict's fantasy world they feel as though they are able to do everything that most cannot achieve under normal circumstances. Cocaine releases addicts into their fantasy world and users enjoy the feeling of being able to do anything, thus they will resort to any means of keeping the high "rather than finding behavioral ways to meet the needs and reduce the state of alarm" (Peele 32). Therefore, addicts "turn to the drug again for more relief" (Woods 23). ...read more.

Thus, when the truth comes out about how he does not know any French, his false invitation, and his life with Amanda, You resorts to cocaine to get him through the day or evening and for a sense of security that everything will turn out for the better. Throughout You's life he finds comfort in cocaine, much like other cocaine addicts are comforted throughout their lives with the use of cocaine. Cocaine users often confide in cocaine usage to motivate themselves in overwhelming and difficult issues in life. The difficult issues often deal with family, friends, and an individual's personal life or their work atmosphere. For You, cocaine affects his actions and responses to the problems that originally stem from the acceptance he finds in cocaine. You eventually is unable to perform his job accurately due to numerous days without sleep and the lack of sleep turns into his forgetfulness. Which all result in the loss of his job. Due to the added stress cocaine users endure and affects of cocaine, over a short period of time addicts, especially You, suffer from anxiety and paranoia. Most of the time You's anxiety and paranoia is due to the fact he is high on cocaine and wonders what is happening or has happened in his nights of partying. In order to avoid and having to deal with reality cocaine addicts tend to avoid the truth by lying and escaping into a fantasy world. Intertwined in You's vast problems is the fact that he avoids telling the truth and fulfills his mishaps with lies, common characteristic of most cocaine addicts. You, resorts to cocaine to comfort him from the truth. Overall, cocaine is a motivator, a stimulant, and a way of life for all addicts including You. ...read more.