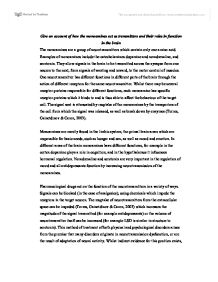 Give an account of how the monoamines act as transmitters and their roles in function in the brain The monoamines are a group of neurotransmitters which contain only one amino acid. Examples of monoamines include the catecholamines dopamine and noradrenaline, and serotonin. They allow signals in the brain to be transmitted across the synapse from one neuron to the next; from signals of wanting and reward, to the motor control of muscles. One neurotransmitter has different functions in different parts of the brain through the action of different receptors for the same neurotransmitter. Whilst there may be several receptor proteins responsible for different functions, each monoamine has specific receptor proteins which it binds to and is thus able to affect the behaviour of the target cell. The signal sent is attenuated by reuptake of the monoamines by the transporters of the cell from which the signal was released, as well as break down by enzymes (Torres, Gainetdinov & Caron, 2003). Monoamines are mostly found in the limbic system; the primal brain areas which are responsible for basic needs, such as hunger and s*x, as well as mood and emotion. In different areas of the brain monoamines have different functions, for example in the cortex dopamine plays a role in cognition; and in the hypothalamus it influences hormonal regulation. Noradrenaline and serotonin are very important in the regulation of mood and all antidepressants function by increasing neurotransmission of the monoamines. ...read more.

These transporters hoover up excess neurotransmitters floating around in the synapse and recycle it. Gainetdinov & Caron (2003) bred mice without these reuptake transporters in order to reveal the effects of excesses of certain neurotransmitters. Many of the psychotropic drugs are effective because they influence neurotransmitter reuptake, hampering the function of the transporters. For example, cocaine hampers the reuptake of the monoamine transmitter norepinephrine and hence leads a small signal to last for a long time. This corresponds with a massive increase in positive mood. The drug lithium, used in the treatment of bipolar disorder produces more rapid reuptake; the logic being that limiting the highs will also reduce the lows. Dopaminergic transmission in the limbic system is responsible for functions including motor control, reward learning and emotion. Excesses of dopamine in the limbic system due to neurotransmitter dysregulation or dysfunction have been implicated as the cause of positive symptoms of schizophrenia, which include hyperactivity and hallucinations. Davis et al. (1991) argue that there may also be a deficit of dopamine in the cortex which is involved in cognition and attention; therefore schizophrenia is the result of an imbalance of dopamine transmission; known as the dopamine hypothesis. Supporting evidence for this idea comes from the finding that the dose of antipsychotics which inhibit dopamine transmission is negatively correlated with positive symptoms (Seeman, 2002). A deficit of dopamine transmission is associated with the symptoms of Parkinson's disease, and is believed to result from the death of dopamine neurons. ...read more.

'First messenger' neurotransmitters are released and bind to their corresponding receptors on the receiving neuron. These cause a change in the receptor of the neuron, which then allows the G protein within the cell to bind to the receptor site as well. The G-protein and an enzyme then bind together which releases a 'second messenger' neurotransmitter; which allows the signal to enter the neuron. The second messenger leads to activation of a protein kinase enzyme. Enzymes influence transcription factors and consequently which of the genes contained in the DNA of the cell are transcribed. Hence the regulation of genes is influenced by neurotransmitters. Different genes are activated in the presence of different, or varying levels of neurotransmitters. These genes direct protein synthesis and hence have a direct influence over how the neuron works (Stahl, 1999) Hence neurotransmission has both a short term effect on behavioural or psychological response through the conveyance of signals and a long term effect on gene transcription. Different genes are transcribed over time. For example, early onset genes are transcribed minutes after the neurotransmitter has been received, whereas other genes are only transcribed over a long period of time. Hence cellular changes may not be immediate. In conclusion the effects of monoamine neurotransmitters on the brain are crucial to many aspects of functioning and drugs which interfere with transmission in the short term may have long term effects through changes in gene expression. The consequences of this may be positive; in the case of antidepressants; or negative in the case of addiction to cocaine. ...read more.