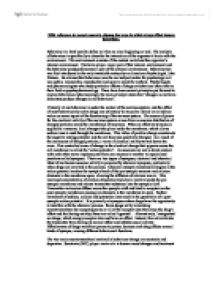 With reference to recent research, discuss the ways in which drugs affect human behaviour.

With reference to recent research, discuss the ways in which drugs affect human behaviour. Behaviour is a hard word to define as it has no clear beginning or end. The analysis of behaviour is specifically to describe the interaction of the organism's brain with the environment. This environment consists of the outside world and the organism's internal environment. The brain plays a major part of that internal environment and the behaviour produced becomes a part of the external environment. Behaviourism was first introduced in the early twentieth century by an American Psychologist, John Watson. He claimed that behaviour was the real subject matter for psychology as it was public, measurable, reproducible and open to scientific method. Psychologists and pharmacologists who study particular effects of drugs on behaviour often refer to their field as psychopharmacology. There have been several principles put forward to explain behavioural pharmacology, the main principle states that 'changes in our brain chemistry produce changes in our behaviour'. Virtually all our behaviour is under the control of the nervous system, and the effect of most behaviourally active drugs can ultimately be traced to a direct or an indirect action on some aspect of the functioning of the nervous system. ...read more.

The release of epinephrine arouses the sympathetic system yet most smokers report that they smoke because it relaxes them. This unexpected observation was named 'Nesbitt's paradox' by Schacter (1973). Smoking also has positive effects on mood as the smoker uses nicotine to control their response to stress. Despite this, a survey carried out in the UK by West (1993) found that smokers have lower levels of psychological well-being than non smokers and ex-smokers. Ethyl alcohol is another psychoactive drug, which is classified as a depressant as it inhibits neural firings. However, at low doses it can also act as a mild stimulant. Research has shown that alcohol's effects share many similarities with general anaesthetics. Anaesthetic has an effect by dissolving the lipid layer of membranes and perturbing some property of the membrane. Miller (1993) suggested that when alcohol, like anaesthetic, dissolves in the membranes, the membranes exert pressure on the ion channels embedded in the membranes and interfere with their ability to open and allow ions to pass through. In turn, the ability of the membrane to form resting and acting potentials is altered. ...read more.

The effects of stimulants drugs such as cocaine are further limited by the tolerance that a user develops. Carlezon et al (1998) found that after using cocaine repeatedly, the drug releases less dopamine and more of a transmitter called dynorphin, which counteracts the reinforcing properties of the drug. Garrise et al (1999) found similar results, after a rat has learnt to press a lever to self stimulate dopamine releasing axon, further stimulation releases less and less dopamine. Much research has been carried out in recent years into the area of drug effects on behaviour. Laboratory animal models of human abuse of drugs, and interesting new laboratory techniques have been developed to study the reinforcing effects of drugs in humans. From the work carried out by biologists, psychologists and pharmacologists, it is clear that no drug has only one effect. In most cases, only one effect of a drug is desired and other effects are not wanted. We could call the effect, for which a drug is taken the 'main effect' and any other a 'side effect'. All 'effects', via interactions with neural pathways in the brain create physiological, psychological or behavioural changes, which can be short-lived or in some cases, have a permanent damaging effect on the user. ...read more.