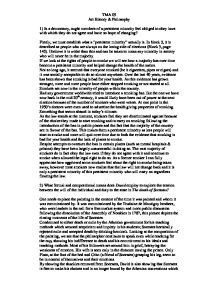 Art History &amp; Philosophy 1) In a democracy, ought members of a persistent minority feel obliged to obey laws with which they do not agree and have no hope of changing?What areas of shared concern can you identify between Davids the death of Socrates a

1) In a democracy, ought members of a persistent minority feel obliged to obey laws with which they do not agree and have no hope of changing?

Firstly, we must establish what a “persistent minority” actually is. In block 3, it is described as people who are always on the losing side of elections (Block 3, page 145). I believe it is wider than this and can be taken to mean any minority in society who will never be in the majority.

If we look at the rights of people to smoke we will see how a majority has over time become a persistent minority and helped change the health of the nation.

Not so long ago, it seemed that everyone smoked (be it cigarettes, pipes or cigars) and it was socially acceptable to do so almost anywhere. Over the last 40 years, evidence has been shown that smoking is bad for your health. As this evidence has grown stronger, more and more people have either stopped smoking or not started at all. Smokers are now in the minority of people within the country.

Had any government worldwide tried to introduce a smoking ban like the one we have now back in the mid 20th century, it would likely have been out of power at the next election because of the number of smokers who were voters. At one point in the 1950’s doctors were even used to advertise the health giving properties of smoking. Something that seems absurd in today’s climate.

As the law stands at the moment, smokers feel they are discriminated against because of the choice they made to start smoking and to carry on smoking following the introduction of the ban in public places and the fact that the majority of the country are in favour of the ban. This makes them a persistent minority as less people will start to smoke and more will quit over time due to both the evidence that smoking is bad for your health and the lack of places to smoke.

Despite attempts to overturn the ban in certain places (such as mental hospitals & prisons) they have been largely unsuccessful in doing so. The vast majority of smokers do in fact obey the law even if they do not agree with it and continue to smoke when allowed the legal right to do so. As a former smoker I can fully appreciate how aggrieved some smokers feel about the right to smoke being taken away, however most smokers now realise that the law will not change back and it is only a persistent minority of this persistent minority who will carry on regardless flouting the law.

2) What formal and compositional means does David employ to explore the tension between the will of the individual and duty to the state in The death of Soctates?

One needs to place the painting in the context of the time it was painted and whom it was commissioned by. It was commissioned by the Trudaine de Montigny brothers, who were leaders in the call for a free market system and more public discussion following the dissolution of the Assembly of Notables in 1787, this picture depicts the closing moments of the life of Socrates.

Condemned to either death or exile by the Athenian government for his teaching methods which aroused scepticism and impiety in his students; Socrates heroically rejected exile and accepted death by drinking hemlock. Looking at the composition of the painting, we see that the philosopher continues to speak even while reaching for the cup, showing his indifference to death and his commitment to his ideals and teaching methods. Most of his followers are around him in grief, betraying the weakness of emotion. His wife is seen only in the distance leaving the prison. Only Plato, at the foot of the bed and Crito (a friend of Socrates) grasping his leg, seem to be in control of themselves and their emotions.

By showing the shackles removed from Socrates, David is also showing that Socrates is free to make his choices and is no longer bound by the Athenian conventions which have led him to this point. He has made his choice. Rather than continue to break the law and teach as he wishes or go into exile, he would rather die. He would rather die than betray his own beliefs and teaching methods. His wife is seen only in the distance leaving the prison, although she doesn’t appear to be upset at the impending death of her husband.

At the time of its unveiling the scene could only call up memories of the recently abandoned attempt at reform, and the large number of political prisoners in the king's jails or in exile. David certainly intended the painting of this scene as a rebuke to those who had given in so easily to the dissolution of the assembly in 1787. On the eve of the Revolution, this picture served as a clarion call to duty and a rallying point to those who wanted change and resistance to the seemingly unjust authority of the king.

3) What areas of shared concern can you identify between David’s the death of Socrates and the philosophical debates about persistent minorities?

It seems to me that when looking at areas of shared concern between the debate and the painting, in the painting David is trying to show the effects of being a minority (in the case of Socrates, a very small one) and its impact on the society around it. The main problem with the persistent minority is that it is by its very nature persistent. As has been pointed out it is more often than not been the squeaky wheel that receives the grease and the attention, and not the ignored minorities. There are also persistent majorities with grievances such as in the past the fight for women’s rights (the suffragette movement) which did eventually change the laws of the land.

Grass root organizations are often a perfect vehicle for minorities. In the case of smokers, they have the aptly named “FOREST”, at the time of David painting the death of Socrates; the people of France were beginning to get fed up of being told what to do by the persistent minority who actually ran France (the nobility & clergy) at the time.