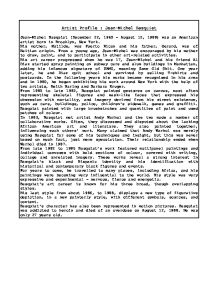 Artist Profile : Jean-Michel Basquiat Jean-Michel Basquiat (December 22, 1960 - August 12, 1988) was an American artist born in Brooklyn, New York. His mother, Matilde, was Puerto Rican and his father, Gerard, was of Haitian origin. From a young age, Jean-Michel was encouraged by his mother to draw, paint, and to participate in other art-related activities. His art career progressed when he was 17, Jean-Michel and his friend Al Diaz started spray painting on subway cars and slum buildings in Manhattan, adding his infamous signature of SAMO, meaning Same Old Shit. ...read more.

Basquiat painted with large brushstrokes and quantities of paint and used patches of colour. In 1983, Basquiat met artist Andy Warhol and the two made a number of collaborative works. Often, they discussed and disputed about the lacking African American art and literature. They also painted together, influencing each others' work. Many claimed that Andy Warhol was merely using Basquiat for some of his techniques and insight, but this was never based on much fact, just mere speculation. ...read more.

For years to come, he travelled to many places, including Africa, and his paintings were becoming very influential to the world. His style was very expressive and experimental - nervous, fierce and energetic. Basquiat's art career is known for his three broad, though overlapping styles. His last style from about 1986, to 1988, displays a new type of figurative depiction, in a new painterly style, with different symbols, sources, and content. Basquiat's character has also been represented in motion pictures. Basquiat was addicted to heroin and died of an overdose on August 12, 1988. He was only 27 years old. ?? ?? ?? ?? ...read more.