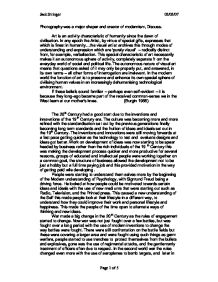 Photography was a major shaper and creator of modernism, Discuss.

Photography was a major shaper and creator of modernism, Discuss. Art is an activity characteristic of humanity since the dawn of civilisation. In any epoch the Artist, by virtue of special gifts, expresses that which is finest in humanity...the visual artist archives this through modes of understanding and expression which are 'purely visual' - radically distinct from, for example, verbalisation. This special characteristic of art necessarily makes it an autonomous sphere of activity, completely separate from the everyday world of social and political life. The autonomous nature of visual art means that questions asked of it may only be properly put, and answered, in its own terms - all other forms of interrogation are irrelevant. In the modern world the function of art is to preserve and enhance its own special sphere of civilising human values in an increasingly dehumanising technological environment. If these beliefs sound familiar - perhaps even self-evident - it is because they long-ago became part of the received common-sense we in the West learn at our mother's knee. (Burgin 1986) The 20th Century had a good start due to the inventions and innovations of the 19th Century era. The culture was becoming more and more refined with the standardisation set out by the previous generations finally becoming long term standards and the fruition of ideas and ideals set out in the 19th Century. ...read more.

This meant that information could be transmitted to another country so speeding up the way news and information was transmitted over long distances. The introduction of Television was a caused a cultural revolution, with visual references to new ideas and ways of thinking, this widened the learning for the masses. Telephones also added to the increase in communication, it took time but over the years most places within the developed countries could be linked by telephone this meant that artists/public could converse to each other over long distances in a much more efficient way that allowed for a two way conversation/discussion to take place. The new developments put a emphasis on time and speed this made the announcement of new inventions, ideas, and inspiration much more speedily available. Now in the 20th Century people expected things to cost less and be made quicker and easier to use. This helped bring photography to the masses because of the mechanisation of the process of the mass building of cameras and also in the manufacture of Photographic paper and negative film. This could be argued as to detracting from the artistic expression of the photographer but it also allowed other artistic movements to experiment with the use of photography. Artistic movements had to be on the move with the understanding that the photograph was replacing peoples requirement to represent people and items in a realistic way ...read more.

Transport with the motorcar allowed for fast effective travel to be done on land and then with the application of aeroplanes for public travel later in the 20th Century meant that many locations around the world that normally would of taken weeks or even months to travel to only took a matter of days. This allowed artists to move around the world expanding their horizons and also giving access to locations that would inspire their skills as artists. Some artists sought to change the way we think of Galleries for example some of the work done by Surrealism and Dada movements for instance, Marcel Duchamp placed a urinal in the gallery claiming that the location in a art gallery made it 'Art', in this way they were challenging our social understanding of art wile also confronting the press and generating interest by doing something diverse and 'outrageous', thus bringing the subject of 'What is Art' to the forefront of discussion. Many of the artistic groups philosophised about the 'Art' subject, some also released manifestoes which could be seen as pretentious. To summarise, photography was a major influence in the Modernist movement, because of the influence a new medium such as photography could have on the older mediums such as Painting, sculpture etc. But also aided in the development of modernism. Photography is now being push further beyond the boundaries due to the introduction of digital imagery capabilities. These in turn have brought the artists drawing skills back into the forefront of development. ...read more.