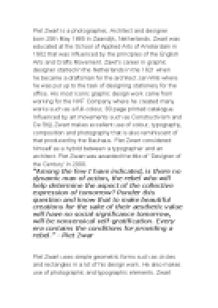 ﻿Piet Zwart is a photographer, Architect and designer born 25th May 1885 in Zaandijk, Netherlands. Zwart was educated at the School of Applied Arts of Amsterdam in 1902 that was influenced by the principles of the English Arts and Crafts Movement. Zawt?s career in graphic designer started in the Netherlands in the 1921 when he became a draftsman for the architect Jan Wils where he was put up to the task of designing stationery for the office. His most iconic graphic design work came from working for the NKF Company where he created many works such as a full-colour, 80 page printed catalogue. Influenced by art movements such as Constructivism and De Stijl, Zwart makes excellent use of colour, typography, composition and photography that is also reminiscent of that produced by the Bauhaus. ...read more.

He also makes use of photographic and typographic elements. Zwart makes use of primary colours in a lot of his pieces as well as contrasting colours like black and white. The composition that Piet Zwart uses is very spaced out creating a large amount of background space, and being careful not to overfill the page. This gives Zwarts work a very clean, industrial look to his designs. The composition elements to his design are very reminiscent to those of the Bauhaus where he has placed text on the page in a vertical way usually following the forms of pictures and geometric shapes. This also helps with the sleekness of his designs. ...read more.

This is why I feel that Piet Zwart was so successful in what he did as he was breaking down barriers of how people should perceive a formal publication. Zwart made this document something that someone would want to look through if only for the visual appeal of the de- signs, which in turn greatly benefited the company as it attracted a wider demographic. Piet Zwart has used the technique of photomontage. He has also colourizer the photographs that he has used; this is to give them a more designed look. He has also used colour burns when layering geometric elements with photographs, this gives the general design a more easier on the eye appearance as placing large block colours on the page would take away the attention of the object that is meant to be the focus. ...read more.