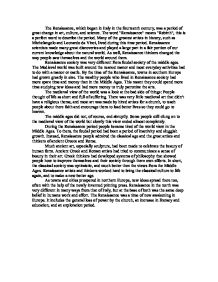 The Renaissance, which began in Italy in the fourteenth century, was a period of great change in art, culture, and science. The word "Renaissance" means "Rebirth", this is a perfect word to describe the period. Many of the greatest artists in history, such as Michelangelo and Leonardo da Vinci, lived during this time period. Renaissance scientists made many great discoveries and played a large part in a fair portion of our current knowledge about the natural world. As well, Renaissance thinkers changed the way people saw themselves and the world around them. Renaissance society was very different from feudal society of the middle ages. ...read more.

The medieval view of the world was a look at the bad side of things: People thought of life as short and full of suffering. There was very little medieval art that didn't have a religious theme, and most art was made by hired artists for a church, to teach people about there faith and encourage them to lead better lives so they could go to heaven. The middle ages did not, of course, end abruptly. Some people still clung on to the medieval view of the world but slowly this view ended almost completely. During the Renaissance period people became tired of the world view in the Middle Ages. ...read more.

In short, the classical society was optimistic, and much better then the views from the Middle Ages. Renaissance artists and thinkers worked hard to bring the classical culture to life again, and to make a new better age. As towns and cities prospered in northern Europe, new ideas spread there too, often with the help of the newly invented printing press. Renaissance in the north was very different in many ways from that of Italy, but at the base of both was the same deep belief in humans work and effort. The Renaissance was a time of new awakening in Europe. It includes the general loss of power by the church, an increase in literacy and education, and an exploration period. ...read more.