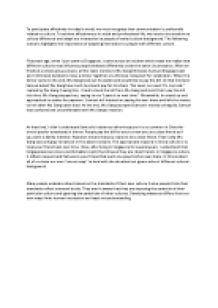 Cross-Cultural Communication. The following scenario highlights the importance of adapting interaction to people with different culture.

﻿To participate effectively in today?s world, we must recognize that communication is profoundly related to culture. To achieve effectiveness in social and professional life, we need to be sensitive to culture difference and adapt our interaction to people of varied culture background. The following scenario highlights the importance of adapting interaction to people with different culture. Five years ago, when I just came to Singapore, I came across an incident which made me realize that different cultures may influence people behaves differently under the same circumstance. After we finished a school group project, all the team members Wu Gang (Chinese), Samuel (Singaporean) ...read more.

Wu Gang stopped me, saying to me ?Leave it to next time?. Meanwhile, he stood up and approached to casher for payment. Samuel still insisted on paying his own share and left the money to him after Wu Gang came back. At the end, Wu Gang accepted Samuel?s money unhappily. Samuel was confused and uncomfortable with Wu Gang?s reaction. At that time, I didn?t understand Samuel?s insistence either because it is so common in China for one to pay for everybody in dinner. People pay the bill for you to treat you as a close friend as if you were a family member. ...read more.

In this incident all of us chose our own ?correct way? to deal with the situation but ignore others? different cultural background. Many people evaluate others based on the standards of their own culture. Some people think their standards reflect universal truths. They aren?t aware that they are imposing the yardstick of their particular culture and ignoring the yardsticks of other cultures. Devaluing whatever differs from our own ways limits human interaction and leads misunderstanding. . In China, one preson usually pays for __6__ . In Western countries, one preson pays if he or she is entertaining clients , but __7__ friends eat together , they usually share the cost. This is called 'going Dutch'. ...read more.