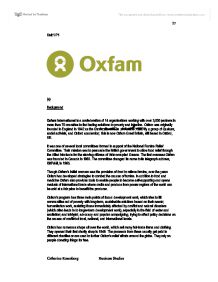 Unit 1 P1 (a) Background Oxfam International is a confederation of 14 organisations working with over 3,000 partners in more than 70 countries to find lasting solutions to poverty and injustice. Oxfam was originally founded in England in 1942 as the Oxford Committee for Famine Relief by a group of Quakers, social activists, and Oxford academics; this is now Oxfam Great Britain, still based in Oxford, UK. It was one of several local committees formed in support of the National Famine Relief Committee. Their mission was to persuade the British government to allow food relief through the Allied blockade for the starving citizens of Axis-occupied Greece. The first overseas Oxfam was founded in Canada in 1963. The committee changed its name to its telegraph address, OXFAM, in 1965. Though Oxfam's initial concern was the provision of food to relieve famine, over the years Oxfam has developed strategies to combat the causes of famine. In addition to food and medicine Oxfam also provides tools to enable people to become self-supporting and opens markets of international trade where crafts and produce from poorer regions of the world can be sold at a fair price to benefit the producer. ...read more.

Oxfam Supporter Panel Oxfam in the News Gardian.co.uk The Observer Volunteer staff and poor security exploited by crooks to loot tens of thousands of pounds-worth of goods a week. Shoplifters are stealing tens of thousands of pounds worth of goods from charity shops every day, taking advantage of the increase in trade due to the credit crunch to steal clothes, DVDs and books. The fact that many shops are staffed by volunteers - some of whom are elderly and many of whom are women - does make them appear to be easy targets for the opportunist thief, whether schoolchildren or the more professional shoplifter," he said. "They don't have sophisticated security measures like other stores can afford. The economic situation means the demands on charity shops to raise money to help people has increased and this [extra security] needs to be financed Due to the Credit Crunch Charity shops are busier than ever at the moment, as you would expect. But the money they are losing could fund some serious research for the charity. The thieves are robbing people with heart conditions of a better quality of life. They benefit communities but are more vulnerable to thieves because they don't invest as much in security ?? ?? ?? ?? 17 Catherine Rosenberg Business Studies ...read more.