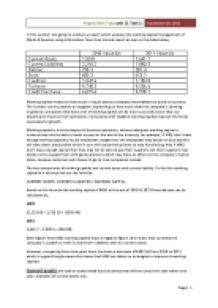 I am going to produce a report which assesses the working capital management of Marks &amp; Spencer using information from their annual report

ï»¿Angela Osei-Tutu[unit 11-Task 2] September 26, 2012 In this section I am going to produce a report which assesses the working capital management of Marks & Spencer using information from their annual report as seen in the table below; 2010 Value £m 2011 Value £m Current Assets 1,53.8 1,641.7 Current Liabilities 2,210.2 1.890.5 Debtors 250.3 281.4 Stock 685.3 613.2 Creditors 1,347.6 1,153.8 Turnover 9,740.3 9,536.6 Credit Purchases 6,015.6 5,918.1 Working capital measures how much in liquid assets a company has available to build its business. The number can be positive or negative, depending on how much debt the company is carrying. In general, companies that have a lot of working capital will be more successful since they can expand and improve their operations. Companies with negative working capital may lack the funds necessary for growth. Working capital is a critical aspect of business operation, without adequate working capital a business may not be able to reach success or the aim of the business, for example, if M&S don’t have enough working capital to found employees’ wages then the employees may decide to quit and this will slow down productivity which in turn will cause the business to stop functioning. Also if M&S don’t have enough capital then they may not be able to pay their suppliers and their suppliers may decide not to supply them with goods anymore which may have an effect on the company’s market share, because customers will choose to go to rival companies instead. The key components of working capitals are current asset and current liability. To find the working capital of a business we use the formula: CURRENT ASSETS- CURRENT LIABILITIES= WORKING CAPITAL Based on this formula the working capital of M&S at the end of 2010 & 2011 financial year can be calculated as; 2010 £1,153.80 – 2,210.20 = (1056.40) 2011 1,641.7 – 1,890.5 = (248.80) Both figures from M&S working capital show a negative figure, this means that currently the company is unable to meet its short-term liabilities with its current assets. ...read more.

Formula for calculating the debtor collection period: (Trade debtors x 365)/sales turnover = number of days 2010 2011 (250.3 x 365)/9740.3=9.38 (613.2 x 365)/9536.6=23.46 Number of days = 10days Number of days= 24days There has been an increase in of 14 days in the debtors? collection period from 2010 to 2011 and this could be a weakness to M&S because it could imply that credit control is not being as carefully managed as previously and this could lead to an increase in bad debt, bad debt is when debtors are not able to pay for their amount owed, this is treated as an expense in the business income statement. Creditor payment period: this measures the number of days taken on an average to pay for credit purchases. Since M&S deals with lots of stock one of their sources of finance form purchasing goods on credit, if the credit payment increases this shows that the business is taking longer to pay creditors than previously. This change can either be a weakness to the business because it could mean that that the business is exceeding the credit period allowed by suppliers and as a result suppliers may discontinue offering credit facilities. On the other hand it can become a strength because it will improve the cash flow of the business. If the creditors? collection period is decreasing this means that the company is taking less time to pay creditors. The change in the creditors? payment period can be interpreted as a strength because the credit control is being more carefully managed and that difficulties with suppliers over exceeding credit limit will no longer occur but it can also be a weakness because the business is now paying suppliers earlier than necessary, resulting in negative impact on cash flow. Formula for calculating creditor payments period; (Creditors x 365) / Purchases = number of days 2010 2011 (1347.60 x 365)/6015.6= 81.77 (1153.8 x 365)/5918.1= 71.16 Number of days= 82days Number of days=71 days Since these figures are decreasing, it shows that M&S are taken less number of days to repay their suppliers. ...read more.

1500 suppliers are supplying clothing, footwear, beauty and home products and rest 500 provide food products. Keeping the record of 2000 suppliers is not easy and in future complex supplying chain could create problem for M&S. M&S could improve on this issue by probably looking to find suppliers that could offer more than one products at a cheaper price to the company and this will help to reduce the number of suppliers they have and hopefully be able to keep track of their creditors payment period. In 2011 the acid ratio test which measures the liquidity of the business has fallen below 1 and it is 0.54, this is very unhealthy for M&S because it means that for every £1 liability they owe they have just 0.54p to cover it, for M&S to improve on its liquidity, it needs to reduce its expenses that are incurred through rent, payment of indirect labour and professional fees and also the amount of money spent on advertisement. Also if the business has any assets that are unproductive they could sell it and the money gain would help increase their current assets figure. To add up M&S can improve profitability by looking at stocks that could be charged at a higher a price or they might want to reduce the price of certain stocks as this will attract more customers. M&S can also improve in its stock turnover by targeting at different age groups, because currently the shop has an image of selling clothes that are targeted to people over their 30’s and in the current market of retail clothing it is known that people below the ages of 30 spend lots of money of clothing. The company could focus on buying and selling products that sell consistently, because there are some products that might sit in the shelf for so long and this will cost cash to be tied up in the stock. Page | ...read more.