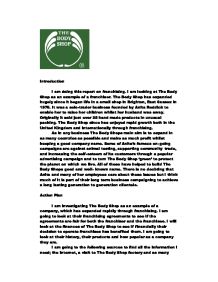 Looking at The Body Shop as an example of a franchiser.

Introduction I am doing this report on franchising. I am looking at The Body Shop as an example of a franchiser. The Body Shop has expanded hugely since it began life in a small shop in Brighton, East Sussex in 1976. It was a sole-trader business founded by Anita Roddick to enable her to raise her children whilst her husband was away. Originally it sold just over 25 hand made products in unusual packing. The Body Shop since has enjoyed rapid growth both in the United Kingdom and internationally through franchising. As in any business The Body Shops main aim is to expand in as many countries as possible and make as much profit whilst keeping a good company name. Some of Anita's famous on-going campaigns are against animal testing, supporting community trade, and increasing the self-esteem of its customers through a popular advertising campaign and to turn The Body Shop 'green' to protect the planet on which we live. All of these have helped to build The Body Shops good and well- known name. There is no doubting that Anita and many of her employees care about these issues but I think much of it is part of their long term business campaigning to achieve a long lasting generation to generation clientele. Action Plan I am investigating The Body Shop as an example of a company, which has expanded rapidly through franchising. ...read more.

Yet their profit has became less every year, this could be because of many reasons. The first is the company are not as economic has they have been in the past, they are spending more on production and advertising etc. The second is that they may be buying more of their franchised shops back to company owned shops. This shows that The Body Shop cannot budget its costs to increase its profits suitably for a business of its size. It is very expensive for the franchisee to invest in a company like The Body Shop because to get the investment fee of �250,000 and the further required premises costs, stock costs and running costs they would have to take out a very large loan and are likely to require more. They are likely to need more money and get this through an overdraft. With less they would have to pay a very large interest rate. The Body Shop have been operating franchises since 1978 when they opened a kiosk in Brussels. The Body Shop operates in 50 countries across 12 different time zones and in 24 different languages. They sell over 1000 different products. Their biggest outlet in a shopping mall in Canada and their smallest operated from a franchisee's living room in Malta. The Body Shop has 1917 outlets (September 2001) ...read more.

As an indicator to their success it shows that they are doing very well by the amount of revenue but are failing to achieve a high rate of profit. Looking at these different ways of measuring success I conclude that The Body Shop is achieving a good revenue, market share and increase in company size. But they are failing to run their business efficiently and achieve the highest rate of profit possible. I believe that using franchises has given The Body Shop larger profits and a bigger size than they would have achieved otherwise, this is why I believe The Body Shop has benefited the greatly from the franchises. I think that on the whole the franchise agreements between The Body Shop and the franchisee are fairly well managed and fair. I think the franchisee should be able to buy stock at about 50% off the recommended retail price but give the company a large percent of their annual turnover e.g. 5-10%. This way The Body Shop will still be making a reasonable profit and so will the franchisee. I also think that the 'set fee' needed to purchase a franchise is very expensive because the franchisee still has to pay for staff, premises, running costs and stock. I also think that it is unfair that the franchiser can terminate the contract without consulting the franchisee, which is the one who does the most work. This concludes my report on the success of The Body Shop as a franchise organization. ...read more.