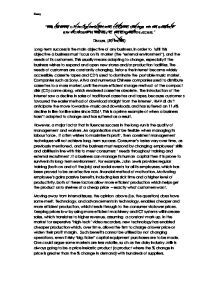 The ability of an organisation to adapt to change in its external environment is the key to its long-term success. Discuss.

"The ability of an organisation to adapt to change in its external environment is the key to its long-term success." Discuss. (40 marks) Long-term success is the main objective of any business. In order to fulfil this objective a business must focus on its market (the 'external environment'), and the needs of its customers. This usually means adapting to change, especially if the business wishes to expand and open new stores and/or production facilities. The needs of customers are constantly changing. Before the internet became widely accessible, cassette tapes and CD's used to dominate the portable music market. Companies such as Sony, Ativa and numerous Chinese companies used to distribute cassettes to a mass market, until the more efficient storage method of the compact disk (CD) came along, which rendered cassettes obsolete. The introduction of the internet saw a decline in sales of traditional cassettes and tapes, because customers favoured the easier method of download straight from the internet. HMV didn't anticipate the move towards e-music and downloads, and has suffered an 11.4% decline in like-for-like sales since 20061. ...read more.

One could argue some markets are less volatile, such as the dairy industry. Milk is always going to be a price inelastic product (a product where the % change in price is greater than the % change in demand) with hundreds of suppliers. Households look for milk to provide a tasty source of calcium, and with milk sales rising greatly every year2 farmers are reluctant to increase price in fear of losing out to another producer. Therefore, farmers need not worry about change in the external environment, there is always going to be demand for their products whether the economy is in a recession or a new competitor sets up. On the contrary, some markets may be extremely volatile. Some products may carry an income elasticity of demand (YED) co-efficient of greater than 1 (income elastic) which means a recession could put them out of business completely. During a recession, unemployment rates soar, and thus reducing the income of society. In such a case, paying close attention to the external environment is vital for the businesses short-term success, never mind the long-term. ...read more.

With consumer tastes changing constantly, firms like HMV will get left behind - as Charles Darwin's theory of evolution suggests, the least fit species get left behind. Business is about the survival of the fittest, and to maintain a healthy business, profit levels and sales must be high, with regular cash inflows every month. In addition to this, with product life cycles ending all the time (such as the iPod classic) extension strategies must be implemented. How does one figure out which product to extend and which to scrap? By looking at what the external environment (predominantly customers) wants and responding to it. Especially with globalisation taking over the way which businesses trade, the external environment is more important than ever. The integration of economies on a national basis frees up trade regulations and allows capital, goods and services and labour to be transported with relative ease. The opening up of these new national markets is an opportunity to be relished and seized by as many firms as possible, thus backing my opinion that adapting to change is the way forward. __________________________________________________________________________________ References: 1. http://www.guardian.co.uk/business/2006/may/09/retail.money http://www.thisismoney.co.uk/news/article.html?in_article_id=410516&in_page_id=2 2. http://future.aae.wisc.edu/data/annual_values/by_area/2356?tab=sales 3. http://windowsitpro.com/article/articleid/40481/os-market-share-microsoft-stomps-the-competition.html 4. http://successfulsoftware. ...read more.