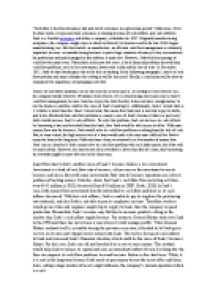 The Cash Flow Problems of Saab.

﻿?Cash flow is the flow of money into and out of a business in a given time period.? (Marcouse, 2011) In other words, it represents how a business is running in terms of cash inflows and cash outflows. Saab is a Swedish aerospace and defence company, established in 1937. Originally manufacturing aeroplanes, the company sought ways in which to diversify its business and in the late 1940s began manufacturing cars. For this kind of car manufacture, an efficient cash flow management is extremely important, because car manufacturing business requires huge samounts of money to buy raw materials for production and profit margin for this industry is quite low. However, Saab failed to manage its cash flow for many years. Particularly in the past few years, a lot of financial problems derived from cash flow problems, such as less investment, lower trade credit and the loss of sales. In December 2011, Saab declared bankruptcy due to the lack of funding. In the following paragraphs, causes of cash flow problem and some solutions for solving it will be discussed. Finally, a conclusion will be draw to summarize the importance of managing cash flow. Causes of cash flows problems can be discussed in several aspects. According to SaabsUnited.com, the company totally owed $ 1.39 billion (SaabsUnited, 2012), which brings heavy pressure to Saab?s cash flow management, because Saab has ...read more.

Also, selling a huge number of assets might influence the company?s normal operation which is a risk. Besides less investment, high expenditure is another cause of Saab?s cash flow problem. Saab?s annual report shows that its capitalized development expenditure was ?152.2 million in 2011, which was approximately two times much than that in 2010. Also, its costs of plant and machinery increased from ?148 million to ?168 million between 2010 and 2011. To analyze, Saab would suffer from increasing cash outflows since the company?s business is suffering from under-revenue, therefore high cash outflows would worsen its cash flow problems. Specifically, spending a lot of money on fixed assets would reduce the total amount of liquidity. Since liquidity reduced, Saab?s ability to pay debts and purchase raw materials will be weakened which might result its business failure. In order to reduce costs, Saab can lease equipment rather than buy it because the cost of leasing equipment is cheaper than buying it, this will help the company to reserve capital in the short term. Nevertheless, leasing will increase a lot of expenses if Saab leases the equipment for a long time. Therefore, leasing would increase cash outflows in the long term. Postponing expenditure could also be helpful to Saab in the short term. ...read more.