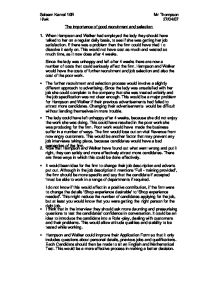 The importance of good recruitment and selection

The importance of good recruitment and selection 1. When Hampson and Walker had employed the lady they should have talked to her on a regular daily basis, to see if she was getting her job satisfaction. If there was a problem then the firm could have tried to dissolve it early on. This would not have cost as much and wasted so much time, as it now does after 4 weeks. Since the lady was unhappy and left after 4 weeks there are now a number of costs that could seriously affect the firm. Hampson and Walker would have the costs of further recruitment and job selection and also the cost of the poor work. ...read more.

� The lady could have left unhappy after 4 weeks, because she did not enjoy the work she was doing. This could have resulted in the poor work she was producing for the firm. Poor work would have made the business suffer in a number of ways. The firm would lose out on vital Revenue from now angry customers. This would be another factor that may prevent any job interviews taking place, because candidates would have a bad perception of the firm. 2. Now that Hampson and Walker have found out what went wrong and put it right, they can safely and more effectively attract more candidates. ...read more.

This might reduce the number of candidates applying for the job, but at least you would know that you were getting the right person for the right job. � I think that in the interview they should ask more daunting and pressurising questions to test the candidates' confidence in conversation. It could be an idea to introduce the candidate into a Role-play, dealing with customers and their problems. This would allow attitude qualities and stability to be tested while working. � Hampson and Walker could improve their Application Form so that it only includes questions about personal details, previous jobs and qualifications. Each Candidate should then be made to sit an English and Mathematical Test. This would be a more effective process in making a better decision. ...read more.