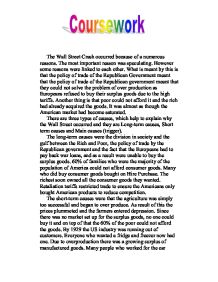 The Wall Street Crash occurred because of a numerous reasons.

Many who did buy consumer goods bought on Hire Purchase. The richest soon owned all the consumer goods they wanted. Retaliation tariffs restricted trade to ensure the Americans only bought American products to reduce competition. The short-term causes were that the agriculture was simply too successful and began to over produce. As result of this the prices plummeted and the farmers entered depression. Since there was no market set up for the surplus goods, no one could buy it and on top of that the 60% of the poor could not afford the goods. By 1929 the US industry was running out of customers. Everyone who wanted a fridge and freezer now had one. ...read more.

By 1929, investors realised that a crisis was looming near and sold their shares. This led to a loss in confidence, which was the main thing that had kept shares rising! Confidence plunged dramatically and no one would buy shares. Investors began panic selling their shares, leading to tumbling prices. On 24 Oct, 13 million shares were sold. On 29 Oct, 16 million were sold! Banks sold their shares to cover losses made by bankrupt speculators. In conclusion the government could have stopped the Wall Street Crash only if they had seen the crash coming. They could have changed their trade policy in order to sell off their surplus goods or even regulated the banks. If only the government had seen this coming then perhaps the Wall Street Crash would never have occurred. ...read more.