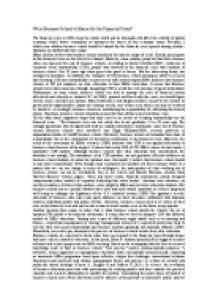 Were Business Schools to Blame for the Financial Crisis?

﻿Were Business School to Blame for the Financial Crisis? The financial crisis in 2008 swept the whole world and its aftermath still affect the stability of global economy, which drives economists to introspect the source of this economic storm. Recently, a debate over whether business school should be blamed for the financial crisis spreads among scholars. Opinions are divided into two camps. Many scholars believe that business school should not become the target of scold. Usually, participants in this financial crisis are the first to be blamed. However, some scholars point out that those business elites can represent the role of business schools. According to David Crowther(2009) , professor of corporate social responsibility (CSR), people who involved in the financial crisis were students of business school 15to 20 years ago when greed was good in theory. But the advocating theory has changed in nowadays. In addition, the examples of UK business school sparing no effort to research into teaching CSR and sustainability in most recent ABS annual report(2009) ...read more.

Personally, I believe that business school should accept some responsibility. Even though some economists has pointed out that economy works in a pattern that we can not change in terms of willingness, the participation of elites walking out of business schools can not be overlooked. Just as Jay Lorsch and Rakesh Khurana, scholars from Harvard Business School, argues, "Ideas and tools?exotic financial instruments, poorly designed compensation plans, models of corporate leadership that value leaders? charisma over substance, an uncritical embrace of laissez-faire models?were taught to MBA and executive-education students. But business schools fail to consider whether these idea and tools would contribute to a firm?s long-term well being or endanger the legitimacy of the U.S. capitalist system."(2008) The ignorance in ethic education of business elites may exert great influence on their decisions confronted with dilemma between individual profits and public welfare. Therefore, business school need to be aware of their roles in the financial crisis and start to take action to avoid similar crisis in the future in my opinion. ...read more.

However, the model may lead to a lower financial surplus from the business school to protect basic research and reflective teaching. Therefore, Hall and Soskice(2001) comment that The public interest model may fit more easily with European rather than Anglo-American schools, as they relate to distinct forms of capitalism. The 'best model' can never be found without practice. Still, we have a long way to the destination of the most appropriate model in business school to prepare for the financial crisis in the future. Reference Andrew,W. L. (2008) "Financial Crisis: Blame B-schools" Bloomberg Businessweek http://www.businessweek.com/debateroom/archives/2008/11/us_financial_cr.html Antonacopoulou, P. E. (2010) "Making the Business School More ?Critical?: Reflexive Critique Based on Phronesis as a Foundation for Impact" British Journal of Management 21. 6-25 Currie G., Knights D.and Starkey K. (2010) "Introduction: A Post-crisis Critical Reflection on Business Schools " British Journal of Management 21. 1-5 Ferlie, E. McGivern, G. and De Moraes, A. (2010) "Developing a Public Interest School of Management " British Journal of Management 21. 60-70 Hall, D. and Soskice, P. (eds) (2001). Varieties of Capitalism. Oxford: Oxford University Press. James, A. (2009) "Academies of the apocalypse?" The Guardian. http://www.guardian.co.uk/education/2009/apr/07/mba-business-schools-credit-crunch ...read more.