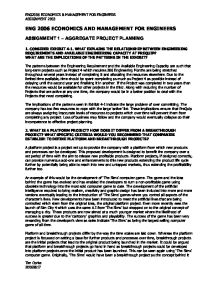 What Explains the Relationship Between Engineering Requirements and Available Engineering Capacity At Prequip?

ENG 2006 ECONOMICS AND MANAGEMENT FOR ENGINEERS ASSIGNMENT 1 - AGGREGATE PROJECT PLANNING 1. CONSIDER EXHIBIT 4-1. WHAT EXPLAINS THE RELATIONSHIP BETWEEN ENGINEERING REQUIREMENTS AND AVAILABLE ENGINEERING CAPACITY AT PREQUIP? WHAT ARE THE IMPLICATIONS OF THE PATTERNS IN THE EXHIBIT? The patterns between the Engineering Requirement and the Available Engineering Capacity are such that long-term projects such as Project 4 which requires 286 Engineering Months are being stretched throughout several years instead of completing it and allocating the resources elsewhere. Due to the limited time available, time should be spent completing as much as Project 4 as possible instead of delaying until the second year and finalising it in another. If the Project was completed in two years then the resources would be available for other projects in the third. Along with reducing the number of Projects that are active at any one time, the company would be in a better position to deal with the Projects that need completing. The implications of the patterns seen in Exhibit 4-1 indicate the large problem of over committing. The company has too few resources to cope with the large 'active' list. These implications ensure that PreQuip are always assigning inaccurate levels of resources to projects which over time will prevent them from completing any project. Loss of business may follow and the company would eventually collapse do their incompetence to effective project planning. 2. WHAT IS A PLATFORM PROJECT? HOW DOES IT DIFFER FROM A BREAKTHROUGH PROJECT? WHAT SPECIFIC CRITERIA WOULD YOU RECOMMEND THAT COMPANIES ESTABLISH TO DEFINE PLATFORM AND BREAKTHROUGH PROJECTS? A platform project is a project set up to provide the company with a platform from which new products and processes can be developed. This proposed development is designed to benefit the company over a set period of time with the aim to release new profitable products. Platform projects, if designed correctly, can provide numerous add-ons and enhancements to this new products extending the product life cycle further by potentially being able to reach into new and untapped markets, thus extending the profitability further too. ...read more.

Originally when the car was released there was a model called the Mondeo Ghia, but over time the look of the car got out dated so Ford redesigned it, re packaged it and released the Mondeo Zetec. This Zetec version had a new brake system, engine capacity, a modern look, modern media options etc etc. The general look of the Zetec was modern and used to update the whole Ford range bringing with it the Fiesta, Ka and Focus etc. 5. WHAT PROBLEMS MIGHT A COMPANY LIKE PREQUIP CONFRONT IN DEFINING ITS DEVELOPMENT CAPACITY? HOW WOULD YOU PROPOSE TO ADDRESS THESE PROBLEMS? * Clarity of information to ensure up to date decisions being made * Incorrect approaches to business - being over ambitious * Over committing resources & key personnel * Increased cost due to all of the above The capacity of the company allows management to make decisions on what projects to undertake and develop in order to create profits. In order to make these decisions, management must have up to date, clear and accurate information about the company at that time. Problems such as not having the clear information restrict management from making the right choice on what to do. The clarity of information depends on other internal problems such as operating incorrect procedures. The development capacity of the company is in the hands of the people within the company maintaining projects in ways laid down by the company. This is because senior management know the aims and objectives they want to achieve. If development teams aren't following the correct procedures then the correct methods of developing ideas and the projects could be threatened reducing the effectiveness of the company's development. Overall, inaccurate figures are being produced to management who make decisions about the capacity at which the company works. Clarity of information is also instrumental if the wrong approach to business is taken. ...read more.

By doing this, a balance between completing smaller projects and continuing with important projects could be made making the companies planning easier to implement in the future. With all these proposal issues would crop up which would affect whether my proposals could be followed through. Resource allocation, mainly staff could cause unrest and confusion as to what their jobs actually were. This could reduce productivity on projects assigned to be continued with and on projects that were still undecided. Another issue that could crop up would be over-committing. This could be a problem if projects were completed using all available resources and then once the project was completed the resources not accurately allocated to other projects. Strong management decisions will need to be made on ensuring the resources had projects to operate on and if there isn't then deciding what to do with the staff. The level of resources would also be overseen and decisions made as to whether the level of staff was too high or low. If high then redundancies may need to be made and if low then issues regarding recruitment may need to be considered. On top of these issues, the threat of increased costs would be ever present during the reorganisation of the company and the way it developed and implemented projects. Scrapping projects is a waste of investment but the development of a pointless project is also a waste. Ensuring that costs are kept minimal would lead management to make the decision as to what is kept and what isn't. Out-sourcing projects wouldn't be cheap but could be balanced by the availability of resources to concentrate on profitable projects. Re-designing the way projects were developed would also accrue costs but not doing so could lead to more investment being wasted. It would also benefit future projects as the chances of them being scrapped would be reduced by implementing correct and accurate planning in the first place. ENG2006 ECONOMICS & MANAGEMENT FOR ENGINEERS ASSIGNMENT 2003 Tim Corke 20069817 ...read more.