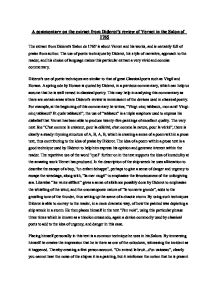 A commentary on the extract from Diderot's review of Vernet in the Salon of 1765 The extract from Diderot's 'Salon de 1765' is about Vernet and his works, and is certainly full of praise from author. The use of poetic techniques by Diderot, his style of narrative, approach to the reader, and his choice of language makes this particular extract a very vivid and concise commentary. Diderot's use of poetic techniques are similar to that of great Classical poets such as Virgil and Horace. A spring ode by Horace is quoted by Diderot, in a previous commentary, which can help us assume that he is well versed in classical poetry. This may help in analysing this commentary as there are certain areas where Diderot's review is reminiscent of the devices used in classical poetry. For example, at the beginning of this commentary he writes, "Vingt-cinq tableaux, mon ami! Vingt-cinq tableaux? Et quels tableaux!", the use of "tableaux" is a triple anaphora used to express his disbelief that Vernet has been able to produce twenty-five paintings of excellent quality. ...read more.

By using such techniques Diderot is able to convey to the reader, in a more dramatic way, of how the painted was depicting a ship wreck in a storm. He then places himself in the text "J'en vois", using this particular phrase three times which is known as a tricolon crescendo, again a device commonly used by classical poets to add to the idea of urgency, and danger in this case. Placing himself personally in this text is a common technique he uses in his Salons. By immersing himself he creates the impression that he is there as one of the onlookers, witnessing the incident as it happened. Thereby creating a first person account. "On entend le bruit...d'un vaisseau", clearly you cannot hear the noise of the ship as it is a painting, but it reinforces the notion that he is present at the wreck. He describes the wreck with quick, short phrases, "ses m�ts sont inclin�s,ses voiles d�chir�es...d'autres secourent, d'autres immobiles", combined with the "J'en vois" phrase it helps contribute to the idea that he is there at the scene and is describing it hurriedly as it is narrated in real time and the ship wreck will end quickly. ...read more.

At the end of this extract he says "il faut les voir", he has described this painting with great detail for those who are unable to see it, and the genius that it contains, however he uses the subjunctive to emphasise his point that words alone cannot fully describe and justify the piece. He does not immediately address the reader but instead talks to Vernet expressing his disbelief at the achievement he has done. He only addresses the reader half way through the text, almost unexpectedly, perhaps to lull the reader into a sense of false security and then change the dynamic and flow of the piece. In classical terms it could be seen that this commentary is similar to an ekphrasis, which is where a dramatic description is given to a visual piece of art. Here Diderot has described this painting in a dramatic narrative to relate to the audience in a more lively manner, which can help encourage others to go see the painting itself, and helps him impress his positive opinion on the reader. It is clear that he admires Vernet's work and has illustrated his appreciation of the artist's skill through an elaborate and favourable review. ...read more.