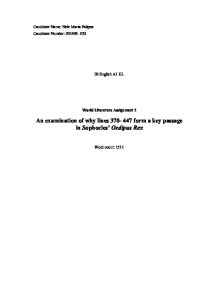 Candidate Name: Nele Maria Palipea Candidate Number: 001408- 023 IB English A1 HL World Literature Assignment 2 An examination of why lines 370- 447 form a key passage in Sophocles' Oedipus Rex Word count: 1511 The passage is significant to the play as a whole because it enables the audience to have an insight to its central themes relatively close to the beginning. In particular, it portrays the protagonist's ignorance of his fate which characterizes him for the large part of the play. It's important to note that the myth behind this play was well known amongst Ancient Greeks. Therefore, Oedipus' ignorance was constantly accompanied with dramatic irony in that time. Moreover, this passage reveals the King's difficult and hubris filled nature to which some critics accredit his demise. Interestingly, Sophocles used a very unconventional but original style in this play where he concentrated on character development rather than action. By applying this different approach, Sophocles solved the issue of captivating his audience who had repeatedly seen the myth of Oedipus Rex produced as a play. This originality was and still is the reason behind the success of this play. ...read more.

It's hard to determine the character's feelings in this play, however, as there are no stage instructions other than to indicate the chorus. Yet, the flowing syntax of his words coming from the use of the connective 'and,' suggests heightened emotions in reaction to the prophet's impudence. Nonetheless, the audience notes again the contrast in his behavior to before where he says 'you know, although you cannot see' (302). He's respectful to both his age and intelligence here despite his disability. This childishness and insulting manner also contrasts with the noble, fair and fatherly view the audience develops of him with his use of 'My children' (1). This creates a particularly profound contrast as it's also the opening sentence of the play. This difficult character is the reason behind Oedipus' ignorance and advancing ruin. Creon comments at a point in the play that 'natures such as [Oedipus'] give most vexation to themselves' (674-675) foreshadowing that the King's character is the reason for his downfall. This links back to when Oedipus describes Teiresias as 'nothing but vexation' (445-446) and creates irony as, in the end, he's inquisitive but 'blind' personality is one to himself, just as Creon predicts. ...read more.

and 'you [are] one with your children' (425-426). When this could be justified by anger of Teiresias 'blinding' his judgement, then his character can't be the reason when speaking to Iocasta. She also recalls a prophecy where 'should [King Laius, her former husband] have a son by [her], that son would take [the King's]... life' (713-714). This is also controversial to the quick- witted Oedipus who is 'Wise above all other men to read life's riddles' (33-34) portrayed in the beginning of the play. Teiresias' mocks and questions his intelligence by asking 'Do you not excel in reading riddles?' (440) amused at Oedipus' inability to see the obvious when this 'has brought [him] glory' (441). In conclusion, this passage is significant to the rest of the play because it portrays the King's true nature to the audience. They are also introduced with the protagonist's 'blindness' and ignorance to the truth which stems form his stubborn and hubris filled character. This difficult personality grants the audience the enjoyment of strong and numerous sources of dramatic irony as they see him moving towards his demise merely thanks to himself. Therefore, this passage is crucial in the audience's understanding of the rest of the play representing the most prevailing themes, and remaining emphatic of Oedipus's ignorance throughout. ...read more.