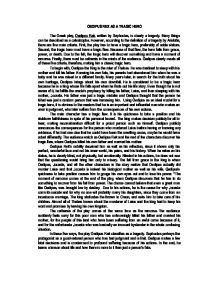 Oedipus Rex as a tragic hero.

OEDIPUS REX AS A TRAGIC HERO The Greek play, Oedipus Rex, written by Sophocles, is clearly a tragedy. Many things can be described as a catastrophe. However, according to the definition of a tragedy by Aristotle, there are five main criteria. First, the play has to have a tragic hero, preferably of noble stature. Second, the tragic hero must have a tragic flaw. Because of that flaw, the hero falls from grace, power, or death. Due to the fall, the tragic hero will discover something and have a moment of remorse. Finally, there must be catharsis in the minds of the audience. Oedipus clearly meets all of these five criteria, therefore, making him a classic tragic hero. To begin with, Oedipus the King is the ruler of Thebes. He was destined to sleep with his mother and kill his father. ...read more.

The main character has a tragic flaw. It is his quickness to take a position and his stubborn faithfulness in spite of his personal hazard. The king makes decision publicly for all to hear, making reconsideration difficult for a proud person such as himself. Oedipus publicly announces the consequences for the person who murdered Laius before having or knowing any evidence. If he had one clue that he could have been the unwitting cause, maybe he would have acted differently. The audience watch as Oedipus Rex and the rest of the characters discover his tragic flaw, where Oedipus killed his own father and married his mother. Oedipus Rex's nobility deceived him as well as his reflection, since it shows only his perfect, wonderful face and not his inner world, his pains, and his history. ...read more.

The king abdicates the thrown to Creon, and asks him to take care of his children. Almost all of Thebes knows about the murderer of Laius and the king had to keep his word and promises by leaving his own kingdom. The catharsis of the play comes at the same time as the remorse. The audience suddenly feels sorry for this poor man who has unknowingly killed his father and married his mother, for the people of this land who have been suffering from an awful curse because of it, and for the unfortunate Jocasta who was basically an innocent bystander in the whole confusing situation. In these five ways, the play Oedipus Rex classifies as a tragedy. Sophocles portrays the protagonist as a good-natured person who has bad judgment and is frail. Oedipus makes a few fatal decisions and is condemned to profound suffering because of his actions. In the end, he learns a lesson about life and how there is more to it than just a person's fate. ...read more.