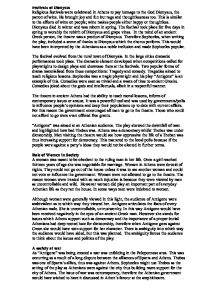 Festivals of Dionysus Religious festivals were celebrated in Athens to pay homage to the God Dionysus, the patron of wine. He brought joy and fun but rage and thoughtlessness too. This is similar to the effects of wine on people; wine makes people either happy or thoughtless. Dionysus died in winter and was reborn in spring. The festival took place for five days in spring to worship the rebirth of Dionysus and grape vines. In the mind of an ancient Greek person, the theatre was a product of Dionysus. Therefore Sophocles, when writing the play, included a scene of thanks to Dionysus which the chorus perform. This would have been interpreted by the Athenians as a noble inclusion and made Sophocles popular. The festival evolved from the rural town of Dionysia. In the large cities dramatic performances took place. The dramatic element developed when competitions called for playwrights to design plays and showcase them at the festivals. Two popular forms of drama materialised from these competitions: Tragedy and comedy. Tragedies aimed to teach religious lessons. Sophocles was a tragic playwright and his play "Antigone" is an example of this. Comedies were seen as trivial and a waste of time to ancient Greeks. Comedies joked about the gods and intellectuals, albeit in a respectful manner. ...read more.

Therefore, Sophocles might be trying to show that the war affects not only a nation as a whole but individual circumstances such as families and relationships. In an Athenian audience, Creon might have been viewed negatively given the fact that he was against everything that Athens stood for; Athens was a democracy whilst Thebes was an Oligarchy. An Oligarchy is a government ruled by a few influential members and is the opposite to a democracy. When Creon goes against the rules of the gods, the audience would have interpreted this negatviely. Although he punished Antigone for going against his word, which might have won him support, the "crime" he is punishing her for is not a crime but an action of respect for the dead. The Influence of the Gods Zeus was the final son of Cronus and Rhea. The other children, upon birth, were swallowed by their father, Cronus, as he was afraid they would overcome him. However, when Zeus was born he was hidden by his mother inside a cave, and Cronus was given a rock, disguised as a baby, to swallow. When Zeus grew up, he ordered his father to regurgitate the stone and his siblings. The male children overcame Cronus and divided up the world. Zeus became the God of Gods for doing what was right, and received the skies and the heavens. ...read more.

However, Creon might have also been expected to fail as he was Oedipus' brother. When Sophocles makes the characters do what the audience expect, the audience would have interpreted this as curses never die and are inherited by one's family. The audience would have evoked a response of fear. The Life and Times of a greek citizen Men were either politicians, farmers or fighters whilst women brought up the family and helped religious festivals. This extraneous work and the lack of medicinal resources meant that people had a short life span. Even healthy people could die prematurely by an illness or disease. To combat this citizens ate healthy and exorcised. A meal was simple but full of vitamins, vegetables and oil. The family of an Athenian was very important and was built on love. Therefore, when the Athenian audience saw the fueds in Antigone's Theban family, the royal family, they would have been disgusted to think people were being led by such a bad example. Thebes was located inland whilst Athens was located near the sea. This made Athens' naval fleet useless when it came to attacking Thebes, whilst Thebes' naval fleet caused havoc on Athens. Argos is located south of both Thebes and Athens, near the sea and was a neutral territory. Greek at this time would have been a nation under war. Greek's people would have been proud of their territory yet scared of invasion. Athens, Argos and Thebes were in the Peloponnese area. ...read more.