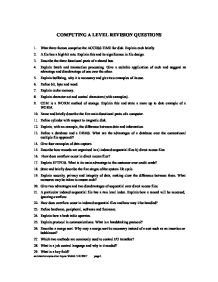 COMPUTING A LEVEL REVISION QUESTIONS 1. What three factors comprise the ACCESS TIME for disk. Explain each briefly. 2. A file has a high hit rate. Explain this and its significance in file design. 3. Describe the three functional parts of a shared bus. 4. Explain batch and transaction processing. Give a suitable application of each and suggest an advantage and disadvantage of one over the other. 5. Explain buffering, why it is necessary and give two examples of its use. 6. Define bit, byte and word. 7. Explain cache memory. 8. Explain character set and control characters (with examples). 9. COM is a WORM method of storage. Explain this and state a more up to date example of a WORM. 10. Name and briefly describe the five main functional parts of a computer. 11. Define cylinder with respect to magnetic disk. 12. Explain, with an example, the difference between data and information. 13. Define a database and a DBMS. What are the advantages of a database over the conventional multiple file approach? 14. Give four examples of data capture. 15. Describe how records are organised in a) indexed sequential files b) direct access files 16. How does overflow occur in direct access files? 17. Explain EFTPOS. ...read more.

Numbers are in normalised floating point form with 8 bits for the mantissa and 4 bits for the exponent. Twos complement is used for both parts. What decimal numbers do the following represent: i) 01100101 0011 ii) 10100011 0100 72. Perform the following subtraction using the twos complement method, showing all working: 72.25 - 38.75 (use a 12-bit word and fixed point format with 8 bits before the point) 73. What are the two features of Assembly languages which make them easier to use than machine code? 74. What are the advantages of high level languages over assembly code? 75. State two advantages of low level languages over high level languages? 76. A stock control system uses batch processing. State 6 items of data which the Master File might contain. State the items of data needed in the Transaction File for each stock record. 77. Explain block packing density and cylinder packing density with reference to the creation of indexed sequential and direct access files. 78. Suggest, with reasons, a method of processing for each of the following applications (in some cases more than one might be used): payroll stock control airline reservations insurance company banking library borrowers' file library book catalogue 79. ...read more.

128. One of the functions of an operating system in multiprogramming is memory management. What does the operating system need to do and how might it be achieved? 129. On what basis might the schedular issue a high priority to a process in multiprogramming? 130. Why can priorities not normally be issued in a multi-access system? What scheduling policy might be used instead? 131. Why is normalisation generally carried out on a relational database? Give a simple example to illustrate your answer. 132. Discuss briefly the problems of concurrent access in databases and how it may be overcome. 133. State three provisions of the UK Data Protection Act concerning the storage of and access to personal data within computer systems. Name some exemptions from these provisions by the act. 134. What is meant by the term ASCII character? 135. State one advantage and one disadvantage of static ram over dynamic ram. 136. Explain the term bit-mapped screen display. 137. What are the advantages of packet switching? 138. Describe two checks which may be made to detect errors in data transmission 139. What is the purpose of the process descriptor (process control block) of a process in multiprogramming? Give three items of information contained in this block.. 140. Give three error conditions which would give rise to an interrupt. ?? ?? revision\revquns.doc Joyce Veitch 15/03/00 page6 ...read more.