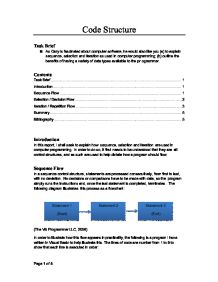 Explain sequence, selection and iteration as used in computer programming; outline the benefits of having a variety of data types available to the programmer.

Code Structure Task Brief * As Gary is fascinated about computer software, he would also like you (a) to explain sequence, selection and iteration as used in computer programming; (b) outline the benefits of having a variety of data types available to the programmer. Contents Task Brief 1 Introduction 1 Sequence Flow 1 Selection / Decision Flow 2 Iteration / Repetition Flow 3 Summery 5 Bibliography 5 Introduction In this report, I shall seek to explain how sequence, selection and iteration are used in computer programming. In order to do so, it first needs to be understood that they are all control structures, and as such are used to help dictate how a program should flow. Sequence Flow In a sequence control structure, statements are processed consecutively, from first to last, with no deviation. No decisions or comparisons have to be made with data, so the program simply runs the instructions and, once the last statement is completed, terminates. The following diagram illustrates this process as a flowchart: (The VB Programmer LLC, 2006) In order to illustrate how this flow appears in practicality, the following is a program I have written in Visual Basic to help illustrate this. ...read more.

In this case, it prints "That's a big number!" on the screen. * If this is not to the affirmative, it is instructed to follow the else clause, which starts at step 11 and continues onto step 12. In this case it prints, "That is not a big number..." on the screen. * Finally, the end if stated in step 13 encapsulates and signals the end of this process, and the program is allowed to continue processing the instructions as a sequence in step 14. (The VB Programmer LLC, 2006) Iteration / Repetition Flow Instructions are repeated in a loop. The loop can be either a fixed repeat loop (where the loop repeats a specified number of times) or a conditional loop (where the loop will continue until a certain condition has been met). The syntax for implementing these two scenarios differs in Visual Basic, but the basic idea of repeating code until an objective has been completed is the same. The following diagram illustrates this process as a flowchart: (The VB Programmer LLC, 2006) This diagram is simplified to be able to account for both kinds of loops, but the general idea is the same. ...read more.

* The value of total is overwritten by the sum of numbers and the existing value of total in step 8 * The value of counter is overwritten by the sum of 1 and the existing value of counter in step 9 * The program prompts the user in step 10 to enter a number, or to enter X to begin calculating the average of all numbers enters by the user * The user's input is recorded into the numbers variable in step 11 * Finally, this loop statement in step 12 instructs the program that the end of the loop has been reached, and to go back to the beginning of the loop at step 7 Summery In this report, I presented how the control structures sequence, selection and iteration are used in computer programming. We learned that the sequence structure processes instructions in a linear fashion to its conclusion. In regards to selection, we learned that it allows us to create two or more different paths for a program to follow by setting criteria. Finally, we learned that loops allow sections of code to be run either a predetermined or unset number of times, depending on the aim of the loop. ...read more.