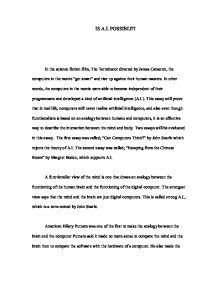 IS A.I. POSSIBLE? In the science fiction film, The Terminator directed by James Cameron, the computers in the movie "get smart" and rise up against their human masters. In other words, the computers in the movie were able to become independent of their programmers and developed a kind of artificial intelligence (A.I.). This essay will prove that in real life, computers will never realize artificial intelligence, and also even though functionalism is based on an analogy between humans and computers, it is an effective way to describe the interaction between the mind and body. Two essays will be evaluated in this essay. The first essay was called; "Can Computers Think?" by John Searle which rejects the theory of A.I. The second essay was called; "Escaping from the Chinese Room" by Margret Boden, which supports A.I. A functionalist view of the mind is one that draws an analogy between the functioning of the human brain and the functioning of the digital computer. The strongest view says that the mind and the brain are just digital computers. This is called strong A.I., which is a term coined by John Searle. American Hilary Putnam was one of the first to make the analogy between the brain and the computer Putnam said it made no more sense to compare the mind and the brain then to compare the software with the hardware of a computer. He also made the point that psychologists were like programmers and electrical engineers were like physicians. ...read more.

Searle has a list of instructions which say, if this squiggle1 comes in, then push squiggle2 out under the door. Searle has no understanding of the squiggle and ad he is just following the instructions. By, analogy, the computer, which uses a similar type of logic also, has no understanding of what the meanings of the inputs are. Therefore, the computer is not thinking. Computers simulate mental ability; the computer is not intelligent, even though it may appear to be doing intelligent things. One example of this was the defeat of the chess grand master Gary Kasparov by the computer, Deep Blue. For human beings, chess requires a high level of thought. The person has to visualize and remember patterns that are occurring through conscious thought and even use psychology to try and figure out their opponent's strategy. The computer plays chess in a totally different way. The computer computes a board position "tree" for the white and black pieces about 20 moves into the future, this means the computer's tree holds about 3 million possible moves. Then the computer uses an algorithm based on simple logic to compare the "goodness" of each move. The computer then makes its moves base on this algorithm. Therefore, just like in the Chinese room, the computer is comparing specific inputs (moves) with logical conditions. The second argument Searle makes in his essay is that only biological entities can produce mental states capable of understanding or intentionality. ...read more.

Boden's point is that the brain of the robot (Searle) cannot be credited with the understanding of the robot; "computationalists do not ascribe intentionality to the brain." Boden tries to show that these intentional states are the product of the robot as a whole, including all its solenoids, photo diodes etc. This is shown when Boden writes "...intentional states such as these are products of people not brains." She tries to demonstrate that the robot and the human brain are the same, in that they are both made up of small very stupid parts which build into a collective brain that is capable of understanding; "The fact that a certain light sensitive cell can respond to intensity gradients and that one neuron can inhibit the firing of another" Problem with this explanation is that now instead of input from a keyboard, the robot now receives its information from its sensors. The input will still be processed programming in the CPU of the robot. Boden did not disprove Searle's point that the syntax of a program is not sufficient for understanding of a digital computer system. Boden could not show that non-biological entity did have understanding, but she did show that Searle's argument on this point was a little weak because it relied on in tuition. The functionalism theory was shown to be an attractive theory a long as it was not taken too literally. Consequently it was shown in this essay that due to syntactical nature of computer programs and the computers lack of causal powers needed for a machine to have mental states. ...read more.