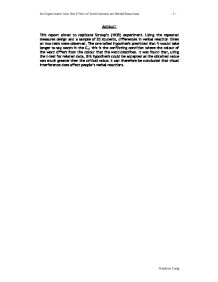 This report aimed to replicate Stroop's (1935) experiment. Using the repeated measures design and a sample of 20 students, differences in verbal reaction times on two tests were observed.

ABSTRACT This report aimed to replicate Stroop's (1935) experiment. Using the repeated measures design and a sample of 20 students, differences in verbal reaction times on two tests were observed. The one-tailed hypothesis predicted that it would take longer to say words in the Cc, this is the conflicting condition where the colour of the word differs from the colour that the word describes. It was found that, using the t-test for related data, this hypothesis could be accepted as the obtained value was much greater then the critical value. It can therefore be concluded that visual interference does affect people's verbal reactions. INTRODUCTION In 1935 John Ridley Stroop published his Ph.D. thesis entitled 'Studies of Interference in Serial Verbal Reactions' - the findings of which became known as 'the Stroop Effect'. Stroop mentioned many studies in his work but the two that are most relevant for this report are Brown (1915) and Telford (1930), they conducted very similar investigations into colour associations and colour recognition patterns respectively. This area of research is known as controlled and automatic processing, it involves studies into how humans cope with divided attention such as multi-tasking. This could be anything from the simple dishwashing and listening to music simultaneously, to complex shadowing of continuous prose presented in one ear, whilst also typing up a separate prose presented to the other ear via headphones (Shaffer 1975). ...read more.

The participant will then be thanked for their time and a brief explanation of what is being investigated will be given to the participant. The researcher will then search for his next participant. This experiment will be carried out according to the British Psychological Society (BPS) Guidelines. As a result, the researchers will not force students of Notre Dame High School to participate; the free choice of the students is understood and respected. Participants will not be deceived or given any misleading information and it will be made known to them that they have the right to withdraw from the experiment at any time. Only the age and gender of the participants will be noted in order to respect the privacy of the participants. RESULTS Raw Data The data from the web page task were collected by two researchers and put into a table (appendix) and also a graph (appendix). Table 1 shows a summary of the raw data in table form: Raw Data Summary Table N = 20 Similar Condition (Cs) Conflicting Condition (Cc) ?x = 319.60 425.80 x = 15.98 21.29 S.D. = 2.69 2.25 Table 1 Where 'N' is the number of participants, '?x' is the sum of all the data for that condition, 'x' is the mean for that condition and 'S.D.' is the standard deviation. Treatment of Results The data was statistically analysed using the 't-Test'. ...read more.

However, as discussed previously, the results in this report do not differ massively from those taken by Ph.D. students in the professional field of psychological research. The 1998 Data Protection Act states that when conducting research of this nature, researchers should not need to disclose personal information of the participants and any needed for the experiment should be destroyed after use. The results taken in this experiment were kept secret from the participants and they were recorded only in terms of age and gender. British Psychological Society Guidelines were also followed (as explained in the procedure) so therefore ethical issues were dealt with as much as was possible. The relationship between the anomalous result and the fact that it was an artist is interesting and could be further investigated. Using two conditions (one with artists and one without) and a repeated measures design, differences could be found in recognition times between the groups. Other factors could also be investigated further, such as the practice effect. A group that has been practising and another group that hasn't could be compared to see if there are any significant differences. Another modification could be the comparison of results from this report with the results of a similar study conducted using the suggested, less ambiguous colours. Conclusion Since it was found that participants did take longer in the Cc, then it can be concluded that the visual interference of colour does effect process times. ...read more.