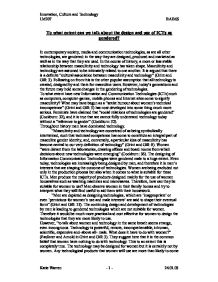 To what extent can we talk about the design and use of ICTs as gendered?

To what extent can we talk about the design and use of ICTs as gendered? In contemporary society, media and communication technologies, as are all other technologies, are gendered: in the way they are designed, produced and marketed as well as in the way that they are used. In the course of history, a more or less stable relationship between masculinity and technology has taken shape. Masculinity and technology are assumed to be intimately related to one another. It is argued that there is a definite "cultural association between masculinity and technology" (Grint and Gill: 3). Following on from this is the other popular assumption that all technology is created, designed by and there for masculine users. However, today's generations and the future may hold some changes in the gendering of technologies. To what extent have new Information and Communication Technologies (ICTs) such as computers, computer-games, mobile phones and Internet sites come to signify masculinity? What may have begun as a "s****t humour about women's technical incompetence" (Grint and Gill: 3) has now developed into some thing much more serious. Feminists have claimed that "social relations of technologies are gendered" (Cockburn: 32), and it is true that we cannot fully understand technology today without a "reference to gender" (Cockburn: 32). ...read more.

In some cases this statement may be true and many peoples ideologies have adapted to believe that it is men who are in control of technologies. In their view "society is presumed to be made up of two discrete cultures- a male (patriarchal) one and an undervalued female one" (Grint and Gill: 6). However, with changing times, these ideologies will also be forced to change and people will begin to realise that women are just as capable as men at designing and implementing technologies. Past experiences have limited women's opportunities in this field but today and in the future this will change. The second view is that of Liberal Feminists. They see technology as neutral and see men and women as being positioned differently in relation to it. These ideas support my views that it is the positioning and ideologies that need to change not the technologies. They follow on this argument stating that gender stereotyping has led to the assumption that women 'lag' behind men in the understanding of technologies. This is because they have, due to these continuous assumptions, adopted this role. Although this ideology sees women as the problem who need to adopt masculine ways of relating to technology, to an extent this is true. ...read more.

They see ICTs as "purely functional" Livingstone: 119) and even as a "substitute for social contact" (Livingstone: 121). Women on the other hand assess the "utility of objects" (Livingstone: 120) and see technologies as a way to "facilitate social contact" (Livingstone: 121), for example the telephone. The design and use of technologies is gendered to a huge extent, but in different ways. On the production line technologies are produced by men and could therefore be gendered as masculine. There has been a continuous ideology that women should not be included in the design of technologies so therefore, the design of technologies is a masculine activity. However, at the moment, there remain clear gender differences when referring to a technology, particularly accounting for the use of a particular technology within the home. Many have become largel gendered faminine within the home and their uses. It seems that throughout history, technologies have become gendered, firstly in their manufacturing and then in their uses and this still remains today. There are definitely different gender relations when it comes to technology and ICTs are gendered both in their use and their design. Ultimately, ICTs are gendered to a large extent in both areas. Male in their design and feminine in their uses in the home as necessities. ...read more.