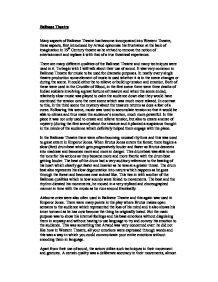 Balinese Theatre Many aspects of Balinese Theatre has become incorporated into Western Theatre, these aspects, first introduced by Artaud epitomise his frustration at the lack of imagination in 19th Century theatre as he strived to remove the notion of entertainment and replace it with that of a true theatrical experience. There are many different qualities of the Balinese Theatre and many techniques were used in it. To begin with I will talk about their use of sound. It was very common in Balinese Theatre for music to be used for dramatic purposes. In nearly every single theatre production some element of music is used whether it is in the scene changes or during the scene. It could either be to relieve or build up tension and emotion. Both of these were used in the Crucifer of Blood, in the first scene there were three deaths of Indian soldiers involving a great fortune of treasure and when the scene ended, relatively slow music was played to calm the audience down else they would have continued the tension onto the next scene which was much more relaxed. ...read more.

The beat of the drum had a very auditory reference to the beating of his heart which clearly got faster and heavier as he was at a greater threat. The drum beat also represents his slow degeneration into nature which happens as he goes through the forest and becomes near animal like. This ties in with another of the Balinese qualities which is how sounds were linked to movements. The beat and the rhythm dictated his movements, he moved in a very stylised and choreographed manner in time with the music as he runs around frantically. Airborne cries were also often used in Balinese Theatre and this again was used in Emperor Jones. There were many points in the play where Brutus makes open screams to the audience which represented the loss of his mind and it also shows his inner torment as he has now become the thing he originally hated. But the main purpose was to show his internal feelings and his base emotions without disguising them in anyway and without having to use language to try and convey his emotion to the audience. ...read more.

Bodily language which emerges by using movement and posture and gestures as well as vocal cries was incredibly important in Balinese Theatre. This was used to great effect in Emperor Jones where the Witch Doctor gyrated and turned in his sort of dance and this really connected with the audience's more primitive side in which they can really see the emotions that the characters are conveying. Also when Brutus is in the forrest, most of the way he conveys his emotion is through the way he walks and the way that he stands and in general his movements. We see how Brutus has a mental and physical deterioration and this is shown by the way he walks (nearly on all fours) and his very quick arm movements which flail about very primitively. To conclude, there are many features from Balinese and oriental theatre which are currently used such as the use of music to create tension - which nearly all plays use, but nearly all plays do not go to the same extent that the Balinese Theatre went to and not include words. So most plays use some aspect of Balinese but very few follow the exact same features religiously. ...read more.