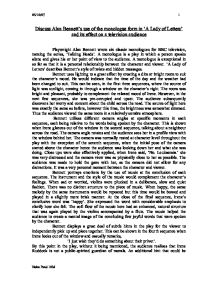 Discuss Alan Bennett's use of the monologue form in 'A Lady of Letters' and its effect on a television audience.

Discuss Alan Bennett's use of the monologue form in 'A Lady of Letters' and its effect on a television audience Playwright Alan Bennett wrote six classic monologues for BBC television, naming the series, 'Talking Heads'. A monologue is a play in which a person speaks alone and gives his or her point of view to the audience. A monologue is exceptional in so far as that it is a personal relationship between the character and viewer. 'A Lady of Letters' describes Bennett's style of twists and hidden messages. Bennett uses lighting to a great effect by creating a dim or bright room to suit the character's mood. He would indicate that the time of the day and the weather had been changed to suit. This can be seen, in the first three sequences, where the source of light was sunlight, coming in through a window on the character's right. The room was bright and pleasant, probably to complement the relaxed mood of Irene. However, in the next few sequences, she was pre-occupied and upset. The audience subsequently discovers her worry and concern about the child across the road. The source of light here was exactly the same as before, however this time, the brightness was somewhat dimmed. Thus the audience viewed the same room in a relatively sombre atmosphere. ...read more.

An additional hint that could be picked up would be that of the boredom Irene experiences, leaving her little to do but gaze outside the window. Another incident can be shown at the opening of the fifth sequence. The audience sees Irene with a coat and hat and does not comprehend until much later when they discover that a policeman had told her to put them on. By understanding this, they would realise that Irene was not going anywhere for a walk but to the police station. When the audience come to know that Irene had written to the police about the child she was concerned about across her road, they also pick up the hint of child abuse. When in prison, however, the audience would have most probably noticed how Irene became considerably more relaxed about swearing. It would be the closest way of informing the audience how much Irene has changed. In this way, Bennett continued to drop hints to express any changes to the audience. Bennett portrayed various atmospheres and character liking in different ways, the most distinct being Irene's clothes, and the setting of the room was is in. In the initial sequence, Irene was dressed in a drab brown shade and the room and the settings in it were drear and uninteresting. Irene herself, however, appeared to be quite content with herself and her surroundings. ...read more.

By doing this, they notice it is obvious that the paper is the only connection Irene had with the outside world. She makes it quite clear by her acting that receiving her newspaper is the highlight of her day as she has nothing else to do in the house and she would enjoy writing letters about the articles she does not approve of. When in prison, the audience could instantly see by her actions that she had changed. She seemed to have a fresh outburst of energy and she was acting as if she were radiant. Again, she was very expressive with her eyes when the camera was close up and the audience could clearly see different feelings being expressed. Bennett manipulates the different tones of voice and pauses used by the character to emphasis feelings further. This can be seen when Irene said, 'No. Leukaemia', as there is a break in her voice. The audience understands that she is naturally depressed and the pause Irene holds after saying that impacts the audience further. This is contrary to the joyful sequence in prison where Irene speaks with a typical energetic and satisfied-- voice which immediately assures the audience that she is contented where she is. From the play overall, the audience are especially effected by the tone of voice of the character. Nevertheless, all the above are equally important if Bennett wanted to convey hints and made sure they were received precisely. 05/10/07 1 Neha Patel 10M ...read more.