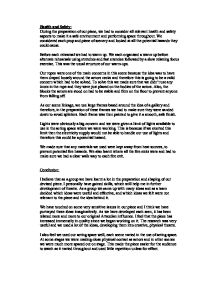 During the preparation of our piece, we had to consider all relevant health and safety aspects to make it a safe environment and performing space throughout.

Health and Safety: During the preparation of our piece, we had to consider all relevant health and safety aspects to make it a safe environment and performing space throughout. We considered each prop and piece of scenery and looked at all the potential hazards they could cause. Before each rehearsal we had to warm up. We each organised a warm up before alternate rehearsals using stretches and fast exercise followed by a slow relaxing focus exercise. This was the usual structure of our warm-ups. Our ropes were one of the main concerns in this scene because the idea was to have them draped loosely around the actors necks and therefore this is going to be a valid concern which had to be solved. To solve this we made sure that we didn't use any knots in the rope and they were just placed on the bodies of the actors. ...read more.

Conclusion: I believe that as a group we have learnt a lot in the preparation and shaping of our devised piece. I personally have gained skills, which will help me in further development of theatre. As a group we came up with many ideas and as a team decided which ideas were useful and effective, and which ideas we felt were not relevant to the piece and the idea behind it. We have touched on some very sensitive issues in our piece and I think we have portrayed these ideas imaginatively. As we have developed each seen, it has been related more and more to our original Artaudian influence. I feel that the piece has increased immensely in quality since we began working on it. The research was very useful and we used a lot of the ideas, developing them into creative, physical theatre. ...read more.

This was overcome by using a variety of focus and concentration exercises followed by each of us getting comfortable with working with the others in the group. There was no conflict, however very positive and constructive criticism. Although a lot of our ideas seemed brilliant, there were obviously practicality issues, which we had to consider. For example although we had ideas for lots of projection throughout, this had to be limited in order to find someone who was willing to control all technical aspects of the production. We found this a difficult thing to do. I felt my acting skills developed throughout the preparation of the piece and I developed each of my characters to their full potential. In conclusion, I am very pleased with our devised piece, and feel I have learnt a lot from it. We approached our issue with a mature and broad outlook, which made this a strong piece with a lot of feeling and meaning behind it. We achieved our aims and developed ideas successfully to produce a positive piece of drama. ...read more.